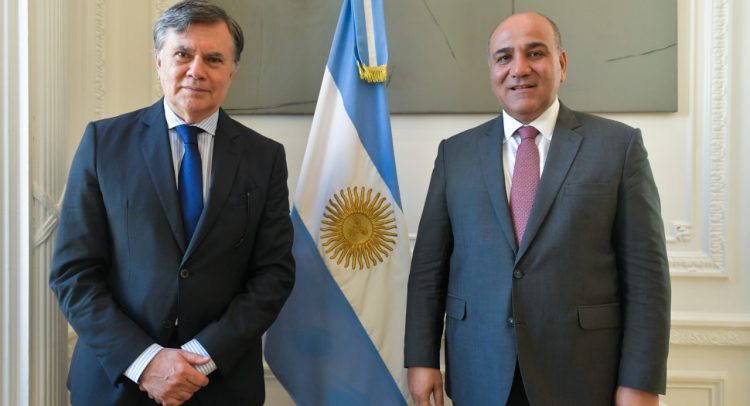 Buenos Aires, 10 December 2021 (IICA). The Chief of the Cabinet of Ministers of Argentina, Juan Manzur, and the Director General of the Inter-American Institute for Cooperation on Agriculture (IICA), Manuel Otero, have stressed that agriculture is a pivotal element for the economic recovery following the COVID-19 pandemic, and given the South American country’s vital role in the region as a major food producer.

In their discussions, the two officials explored ways of stepping up Argentina’s technical assistance and technology and knowledge transfer activities, with IICA serving as a bridge to other sub-regions in the continent whose levels of food insecurity are a cause for concern.

“We discussed agricultural development as a pivotal element for the economic recovery,” said Manzur, who hosted the meeting at the Casa Rosada along with the Deputy Chief of the Cabinet, Jorge Neme.

“We also looked at ways of securing the financing needed to boost this sector,” the senior Argentine official added.

In Buenos Aires, IICA’s Director General also met with the Argentine Foreign Minister, Santiago Cafiero, with both stressing that the decisions adopted to transform agri-food systems should be science-based.

One of the key issues discussed in the meetings with Manzur, Neme and Cafiero was the importance of securing financing for agricultural development, and the resulting need to create a pre-investment unit. The officials also focused on the key role that agricultural technical schools play in rural areas in developing the skills of young people; and looked at ways of involving the ministries in a project to maximize their potential.

Otero emphasized the level of excellence of agricultural scientific research in Argentina.

“The country is very advanced as far as agricultural biotechnology is concerned, thanks to all the technological developments that have taken place and the country’s dynamic approach to biosafety issues. Given all the progress being made, not only regarding transgenics but also the latest developments in gene editing, Argentina is in the forefront at the continental level and could and should share this knowledge with other countries in the Americas,” he observed.

This year IICA spearheaded a wide-ranging process of discussions that led to the 34 countries of the Americas reaching a consensus before they took part in the United Nations Food Systems Summit. This meant that the continent was the only one to present a message agreed by all the countries to the global meeting held last September. And that message stated that agriculture was part of the solution to the challenges currently facing humankind, that the policies to be adopted should be science-based, and that agricultural producers should be involved in the debate about the transformation of agri-food systems.

At the end of the meeting at the Casa Rosada, the IICA Director General remarked that “there is growing awareness of the importance of agriculture, and we must champion its cause. The problems can be solved with more science and innovation, championing the viability of family farmers, and creating the conditions for more sustainable and more inclusive agriculture.”

“And we need to produce food, not only in bigger quantities but also of a higher nutritional quality. That, surely, will be the main priority for the next 15 or 20 years, and Argentina stands ready.”

Otero was accompanied by several IICA colleagues during the meeting: the Special Advisor to the General Directorate, Jorge Werthein; the IICA Representative in Argentina and Coordinator of the Southern Region, Caio Rocha; the IICA Representative in Brazil, Gabriel Delgado; and IICA Argentina’s Special Advisor for Institutional Relations, Ignacio Hernaiz.

Featured Image – IICA’s Director General, Manuel Otero, and the Chief of the Cabinet of Ministers of Argentina, Juan Manzur, explored ways of stepping up Argentina’s technical assistance and technology and knowledge transfer activities, with the Institute serving as a bridge to other sub-regions in the continent whose levels of food insecurity are a cause for concern.

US commander: Al-Qaida numbers in Afghanistan up ‘slightly’

UN: Afghanistan’s economy is collapsing `before our eyes’