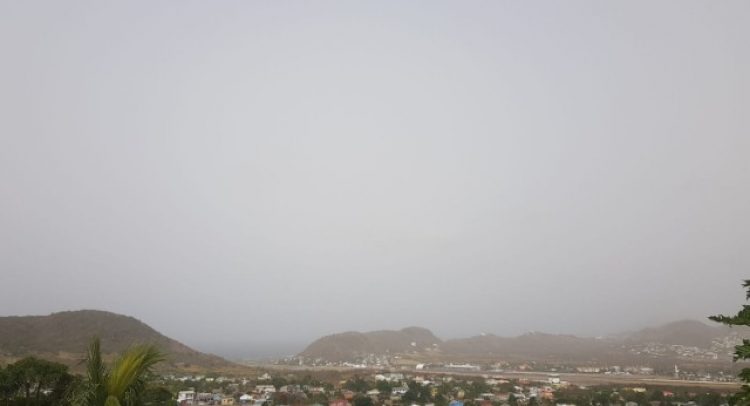 Basseterre, Tuesday, 23rd June, 2020, (MyVueNews.com) -It is starting to show signs that clearer skies are soon ahead, but for now the plume of Saharan dust remains settled over the islands of the Caribbean, including St. Kitts & Nevis.

While Monday was perhaps the worse to come, Tuesday, brought a little hope as the sun emerged for short bouts and some sections of the sky showed signs of weakening of the thick layer that was evident most of the weekend.

The major concern being expressed by health officials relates to residents who may suffer from various respiratory ailments.

Since leaving the coast of Africa on 10th June, and arriving in the region on Friday, 19th, the worse experience was on Monday, 22nd June, when visibility was at its worse.

No longer was it possible to see the coastline of Nevis, if living on St. Kitts and vice versa, if resident on Nevis.

In many countries in the region, visibility was no more than 700 metres and air quality dropped to record and hazardous levels.

In St. Kitts and Nevis, meteorological officials explained that “This mass of very dusty air was formed over the Sahara Desert on the West Coast of Africa and was transported by easterly trade winds, westward across the northern Atlantic to the Lesser Antilles.”

This, they added, is a regular phenomenon that occurs between March to September each year.

This Saharan Air Layer (SAL) has been impacting the Federation in the following two (2) ways: 1. A Difference in the Sky. The blanket of tiny dust particles creates a hazy sky… (2) Increase in complaints related to allergies, because this increase in airborne particulates and dust can be irritating for individuals already diagnosed with allergies and respiratory conditions like asthma and chronic obstructive pulmonary disease (COPD).

The officials also said that persons can experience the following symptoms when outdoors and exposed to these pollutants: (1) itchy eyes, (2) burning eyes, (3) runny nose, (4) sneezing and, if asthmatic, you can experience chest tightness and even wheezing. Such individuals may have to seek medical care.

As a consequence, “It is recommended that persons with respiratory conditions and allergies should remain indoors as much as possible. While outdoors, the wearing of a facemask will be beneficial, as it will protect you from inhaling the pollutants and dust particles,” said health officials.

It was also advised that respiratory hygiene should be an imperative at this time, and residents should remember to use disposable tissues when coughing and sneezing, and to keep their hands out of their face, while washing hands regularly with soap and water or use an appropriate hand sanitizer.

Some experts have suggested that clearer skies are possible, close to the coming weekend.

Saudi Arabia: Hajj will see at most ‘thousands’ due to virus

'Toughest batsman' Lara was just too much - Ntini