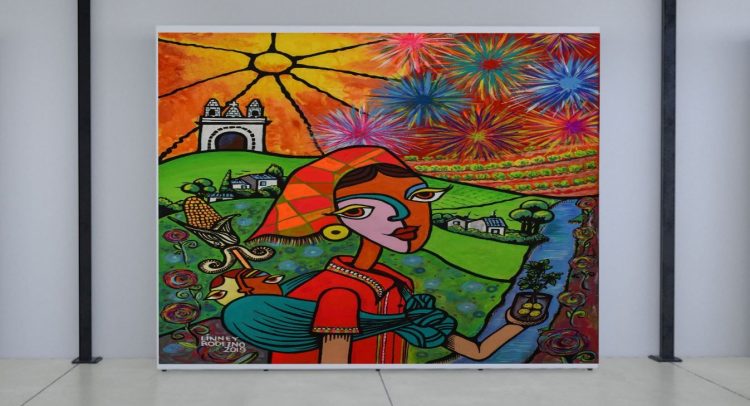 The Colors of Earth: Artwork by Honduran painters on display in new AgroArt exhibit

San Jose, 20 May 2021 (IICA) – AgroArt, IICA’s Virtual Art Museum—a space for disseminating and integrating the artistic expressions of the Americas emanating from the rich diversity of rural areas—inaugurated a new exhibit of Honduran art.

The exhibit entitled “The Colors of Earth” comprises 15 works of art that evoke the rich gastronomy, culture, history, and wealth and chromatic diversity of the Department of Intibucá, Honduras, as well as the leading role of women and indigenous communities in the field, and, above all, the close, fundamental relationship between agriculture and the identity of this Honduran territory.

This new art collection is the product of an initiative led by the IICA Representative in Honduras and the Chamber of Commerce and Industry in Intibucá (CCII) in the form of an art contest entitled “Agriculture in Intibucá”, with the participation of 45 artists.

The Museum hopes to reproduce this initiative throughout the American continent, through its IICA representatives in each of the 34 Member States.

“We believe and hope that this event can be replicated across the Americas, including the Caribbean. Each of the regions of our continent possesses enormous artistic wealth associated with rural life and, due to its unique characteristics, the Museum could be the catalyst for this invaluable diversity”, commented Amanda Fernández, architect and president of IICA’s Community Outreach Association and head of the AgroArt project.

Fernández added that “at AgroArt, we believe that opening a space to this contest in Honduras, as well as to others we have already held or will hold in association with the IICA representatives, will support budding artists in a number of ways, such as giving them a space in which to be seen and acting as a catapult for putting their artwork on display. It will also help artists who are just starting out to connect with others and create positive synergies”.

AgroArt’s virtual space helps to build bridges and creates a dialogue between the urban and rural spheres. One of its main premises is that through art the urban centers can learn about rural life.

Meanwhile, the access of the artistic expression emanating from the rural communities to spaces and channels of dissemination that were once seen as out of reach has the ability to awaken a sense of pride and belonging in remote areas.

Intibucá, one of 18 departments of Honduras, is located in the western part of the country.

Franklin Marín, IICA Representative in Honduras, explained that the initiative seeks not only to demonstrate the agricultural opportunities available in the department of Intibucá, but also its climate and people, underscoring the role of Lenca women, an indigenous people with vast cultural heritage in the region.

Prior to “The Colors of Earth”, AgroArt had also inaugurated “Rural Chronicles”, a photographic tribute to women in rural areas, and “Identity and Roots”, painted expressions of the rich cultural diversity of the rural areas of the Americas.

Link to the new exhibit: https://agroart.iica.int/concurso-los-colores-de-la-tierra/

Deadline for 25 Most Remarkable Teens Nomination