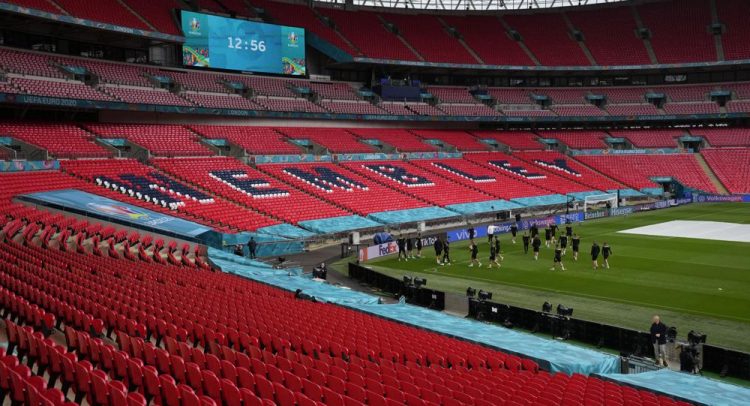 The Latest on soccer’s European Championship:

The British government says more than 60,000 fans will be allowed into the semifinals and final of the European Championship at Wembley Stadium.

No details have been provided yet on how fans from overseas can attend without having to quarantine after flying into London.

The government had already agreed to increase the current group-stage capacity of about 22,000 to at least 40,000 for one game in the round of 16 game and the final three matches of the Euro 2020 tournament at the 90,000-seat stadium.

Now Wembley will be allowed to be at about 75% capacity for the semifinals and final.

UEFA president Aleksander Ceferin says he is “grateful to the prime minister and the UK government for their hard work in finalizing these arrangements with us.”

UEFA said last week it was in talks with authorities in London about allowing fans in by staying in the country less than 24 hours and staying within bubbles.

The 10-day isolation comes after they came into contact with Scotland midfielder Billy Gilmour at Wembley Stadium after Friday’s game.

England says the decision to extend the isolation followed talks with health authorities.

They will train alone.

Some Spain players were not happy with criticism from former Netherlands midfielder Rafael van der Vaart.

Van der Vaart is a commentator for a Dutch television channel at the European Championship and reportedly criticized Spain for its poor performances at the tournament. Spanish media quoted him as saying that the team was “horrible” and only “passes the ball from one side to the other.”

Van der Vaart was a former Real Madrid and Real Betis player. He was a member of the Dutch team that lost to Spain in the 2010 World Cup final.

Spain midfielder Koke Resurrección says Van der Vaart was “seeking his moment of glory” and that he remembers “seeing him in the World Cup final.”

Forward Pablo Sarabia says Van der Vaart “made a mistake” with his comments “especially being a former player.” Sarabia says his only recollection of him is from the 2010 World Cup “when things didn’t go well for him.”

Spain faces Slovakia in its final Group E match on Wednesday. It needs a win to secure a place in the next round after consecutive draws against Sweden and Poland.

UEFA has declined the Munich city council’s application to have its stadium illuminated in rainbow colors for Germany’s final group game against Hungary at the European Championship.

The governing body says it understands the intention behind the proposal but it “must decline this request” because of its political context.

Munich Mayor Dieter Reiter’s application on behalf of the council made clear that it was to protest a law passed by Hungarian lawmakers last week that prohibits sharing with minors any content portraying homosexuality or sex reassignment. The law has been denounced as anti-LGBT discrimination by human rights groups.

England and the Czech Republic both advanced to the round of 16 at the European Championship a day before their match.

Results in other groups allowed both to be guaranteed of at least one of the four best third-place spots.

The teams will meet at Wembley Stadium in London with no pressure for advancement but with first place in Group D on the line.

Scotland or Croatia can join them in the round of 16 with a victory. They both have one point from their opening two matches and will play each other at Hampden Park in Glasgow.