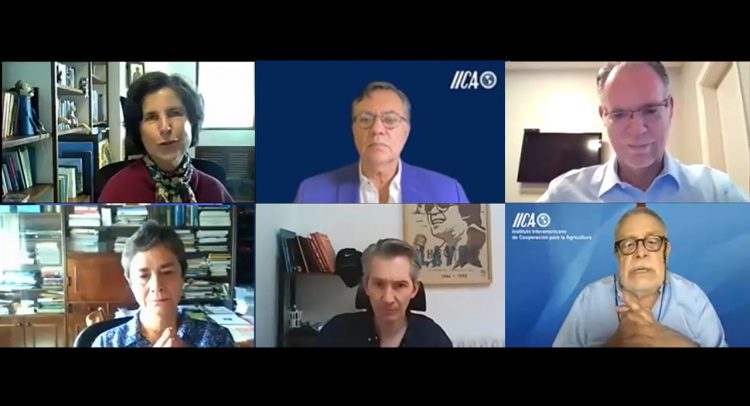 San Jose, 10 June 2021 (IICA). Positive food system transformation will require the creation of coalitions and increased production, on the basis of strengthened national science and technology systems. This will be key to capitalizing on the full potential of opportunities and to protecting and restoring the natural environment.

These were some of the main ideas and conclusions presented at a virtual forum on “Science, Technology and Innovation to Transform Food Systems in Latin America” – the final in a series of five meetings, organized by the Inter-American Institute for Cooperation on Agriculture (IICA), in preparation for the UN Food Systems Summit.

The meetings, which are taking place within the framework of numerous virtual dialogues organized by IICA prior to the global meeting, enjoyed the support of the Alliance of Bioversity International and the International Center for Tropical Agriculture (CIAT), the Food and Land Use Coalition and the World Wildlife Fund (WWF).

In opening the forum, Director General, Manuel Otero, insisted that, “Only science, technology and innovation will allow us to transform our agrifood systems for the better—as a fundamental component of the global economy—and in turn to improve their production output. The forum was presented and moderated by Eduardo Trigo, Special Advisor to the Director General and the “sherpa” of the specialized agency of the Inter-American system for the UN Summit.

Otero stressed that farmers—who he defined as “The Soul of Rurality”—should be adequately represented at the Summit, and also highlighted IICA’s hemispheric initiative, Living Soils of the Americas, as a key program to “restore soil health, bearing in mind that today more than half of the soil in Mesoamerica is severely degraded”.

On the other hand, Claudia Martínez, Executive Director of E3-Ecología, Economía y Ética, a private sector organization in Colombia that promotes ecology, economics and ethics as an integral part of its planning and business strategies, spoke about the importance of coalitions and production conditions. Like IICA, E3 is part of the Champions Network, one of the support structures of the UN Summit.

To this end, she stressed the need to foster “coalitions to transform Latin American food systems”, and then, referred to the cost- and land-related problems that affect production”.

“Globally, hidden costs for food and land use surpass 12 billion dollars compared to the market value of global food systems, which is 10 billion dollars in total. In other words, today, these systems are costing the world more than they are producing. That is what we must change”, she said.

She therefore proposed that the region continue to work towards this transformation, while expressing the view that production should be expanded “in a hemisphere that has been richly blessed with food sources. Of the region’s 300,000 plant species, only 100 or 150 are being consumed, with wheat, corn, rice and potatoes accounting for 60% of the calories we consume”.

Moreover, she stressed the tremendous importance of the business opportunities that could result from agrifood system transformations, remarking that “science and technology stand to play a critical role in this and in protecting and restoring the natural environment.  This would mean putting a stop to the conversion of forests and other natural ecosystems”.

On the other hand, Joao Campari, Global Leader of the WWF’s Food Practice, referred to the challenge of achieving the Sustainable Development Goals by 2030, which call on us to “resolve various issues with respect to the way we produce food”.

He stressed, for example, water use, biodiversity losses and the squandering of natural resources.

“What we are seeking is to protect eco-natural systems, which will require us to manage existing food production systems and to restore degraded ecosystems, by restoring soil functioning”, he said.

Thus, he remarked, the Summit “should be a Summit involving countries, individuals and the actions of those countries”, seeking to mitigate phenomena such as deforestation and soil degradation that caused Latin America and the Caribbean to lose one quarter of its forests between 2004 and 2017, throughout the Amazon, the Chaco, the lowlands of Bolivia, the Mayan Forests, and the Chocó-Darién – an eco-region in western Colombia and eastern Panama, characterized by extremely high levels of rainfall and vast biodiversity.

Like Otero and Martínez, Campari advocated for the use of science and technology “to make much more efficient use of production, to produce more with less and to be more inclusive”. In concluding, he stated that, “Food systems have done a great deal for the world in recent decades, but we now need to rethink them, because the conditions in which they are operating are different and as producers and environmentalists we must continuously work together”.

After the initial session, the forum split up into eight discussion groups, with about one hundred participants. At the end, one member selected from each team presented a summary of the discussion.

Some of the key issues addressed were matters such as the relationship between science and the ancestral knowledge of agricultural communities; training and extension services in rural areas; new ways of eating and producing; alternative proteins; agricultural frontiers and livestock rearing; and how to better assess the value of agrifood systems adjoining forests, among others.

Climate change, its causes and effects on production and on food, was one of the most frequently recurring topics in the group debates and a priority area of focus for science- and technology-based innovations.

The impact of public policies sustained over time—regardless of the political administration in power—was another justification for engaging in sustainable agriculture, to combat deforestation and climate change, improve the quality of production and trade facilitation, among other challenges facing regional agrifood systems.

One of the decisive conclusions of the debates was the importance of research, which the participants felt should no longer be disciplinary, but inter-disciplinary, with increased investment in science and technology to provide funding for producers and scientific publications.

The use of digital tools to enhance efficiency, increase production and improve decision-making was also promoted, and particularly the need for accessibility and connectivity.

In summarizing the information arising from the group discussions, Juan Lucas Restrepo, Director General of the Alliance of Bioversity International and the International Center for Tropical Agriculture (CIAT), emphasized the importance of discussion forums, indicating that, “These types of sessions are fundamental”, since it is not only the region’s ministries of Agriculture that should be expected to implement initiatives, but also the private sector, producers, academia and consumers”.

“We have to holistically rethink how we are working as a region and how we are caring for our natural resources, our forests and our soils”, concluded Restrepo.