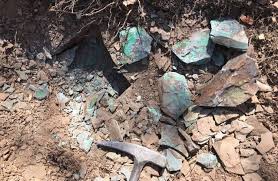 Gold once lured prospectors to the American west – but now it’s cobalt that is sparking a rush. Cobalt mining has not happened at any sort of scale in the United States for decades. But a handful of mining companies are now staking claims at sites in Idaho, Montana and Alaska in search of the silvery blue mineral.

They are striking examples of the growing interest in cobalt – a key component in the lithium-ion batteries that power electronic devices and electric cars.

In the past, cobalt supply depended on the markets for copper and nickel, more valuable metals that are typically extracted alongside cobalt.

But with cobalt prices on the up and consumption projected to rise by between 8% to 10% a year, its status as a by-product has started to change, says George Heppel, senior analyst at research firm CRU Group in London.

About 300 companies worldwide are now on the hunt for cobalt deposits, CRU estimates.

Mining giants such as Glencore are also boosting production in the Democratic Republic of Congo (DRC), where most of the world’s cobalt is found.

In the US, limited cobalt production started in 2014 for the first time in about four decades.

Canada-based First Cobalt bought a mine in Idaho this spring and hopes to get it operating in about three years. Cobalt, rather than copper or another metal, is its main focus for the mine, says chief executive Trent Mell. “Miners like us have never actually gone looking for cobalt,” he says. “There’s a lot of cobalt in the world. As miners, we’re behind.”

Cobalt consumption is expected to exceed 122,000 tonnes this year, up from about 75,000 tonnes in 2011, according to CRU. The price per pound (the measure used for cobalt) has risen above $40 this year, compared with about $20 in early 2011, and is now at about $32. Although increased production is likely to help meet demand in the next few years, analysts say shortages loom by as soon as 2022.

The market dynamics have helped to build confidence, says Fiona Grant Leydier of eCobalt, which has revived plans for its own cobalt mine in Idaho that were first mooted in the 1990s.

The firm, previously called Formation Metals, now expects production to start towards the end of next year. “The fundamentals for the cobalt market are so strong in a way that they have never been before,” says Ms Grant Leydier. “We have a lot of interest from financiers, from potential partners and from potential employees.”

After ore containing cobalt is mined using explosives, it is taken to be refined and turned into metal, blends or chemical concentrates for use in products such as jet engines, drones and batteries.

More than 60% of the world’s cobalt is mined in the DRC, while China is the world’s leading producer of refined cobalt.

But as demand for cobalt has risen, so have concerns in the US about its reliance on imports.

In February, the US added cobalt to a list of 35 minerals deemed critical to the economy.

Companies active in the US say they hope their “made in America” status will help speed up government approval for their plans and set their product apart from imports.