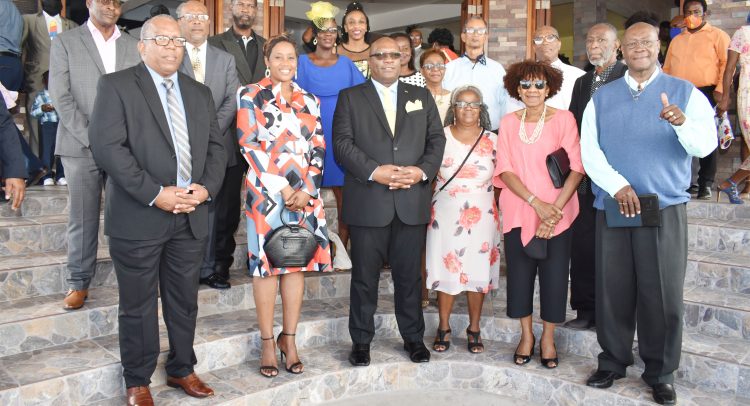 The Pulse of St. Kitts and Nevis: PM Harris commends Board, management and staff of ZIZ

Prime Minister and Minister of Human Resource Management and Information, Dr the Hon Timothy Harris, is commending ZIZ Broadcasting Corporation (ZBC) for the role it has played in the sixty years of its existence in making St. Kitts and Nevis the country it is, and the general public for giving ZIZ their fullest support.

Prime Minister Harris made the remarks on Sunday March 7 at the Antioch Baptist Church in Lime Kiln, West Basseterre, where he had joined members of the Board of Directors, Management, and Staff of ZIZ Broadcasting Corporation (ZBC) for worship in celebration of ZIZ’s 60th anniversary which is being observed under the theme ‘Building on our Legacy, ZIZ at 60!’.

Dr Harris, who had invited them to the front so as to introduce them to the congregation, thanked all of them for their contribution in keeping the nation’s radio station going, those in the background and those in the foreground. He noted that ZIZ is a station that was reliable in good times and bad times, and mentioned the hurricane season, cricketing season, and carnival among others where ZIZ would feature prominently as it kept the public abreast of what was happening.

“Without ZIZ, the St. Kitts and Nevis we have grown to love and to become would not have been possible,” stated Dr Harris. “Thanks very much and it is you the people who listen to ZIZ daily and frequently who have helped ZIZ become what it has become for all of us, and we do some very unique things. I think ZIZ within the region is one of the few stations that carry our parliament for example live – both on radio and television, so everyone can see.”

The Team Unity Government, Prime Minister Harris added, has over the last year or so invested heavily in ZIZ, and has modernised it to a level that today it has one of the largest viewership across major platforms – more than any other radio station within the OECS.

In further commending ZIZ, the Prime Minister said it is clearly the number one and is a station where one would get good return on their money if they have an advertisement to do, advising that ZIZ should be one’s number one choice. He thanked the management and staff for offering special programmes through which ZIZ has over many years been bringing, among them, the Gospel to people’s homes through radio and TV.

“So from the bottom of my heart, I express the love of the country and the love of our people for all that ZIZ has become over sixty years and it is our collective hope that the station will go from strength to strength,” concluded the Honourable Prime Minister.

The service was conducted by Senior Pastor Lincoln Connor who had complimentary words for the ZIZ team, most of whom he knew by name. Reading from the scriptures was Mr Carl Springette of ZIZ, while renowned radio personality, ZIZ continuity announcer and receptionist Mrs Jasmine ‘Jazzy-D’ Thomas made a rendition of ‘Hallelujah our God reigns’.

Photo: Prime Minister Harris and Health Minister Byron-Nisbett pose with Board, Management and Staff of ZIZ. Chairman Lester Hanley is on the left (front row), and General Manager Mr Viere Galloway is on the right.

Building on our Legacy: ZIZ at 60 presents refrigerator to Ade's Place