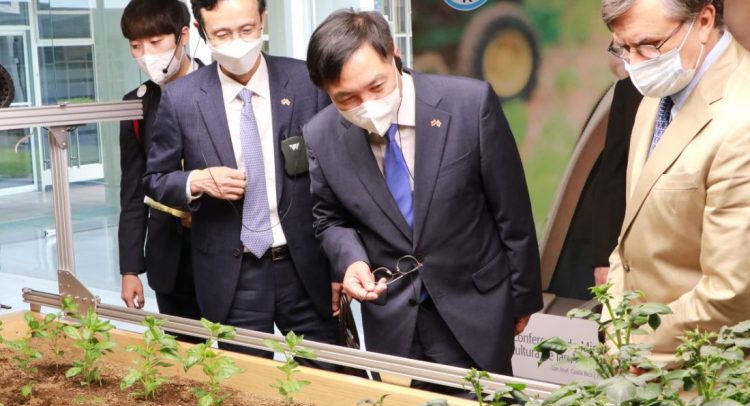 San Jose, 21 July 2021 – The Republic of Korea and the Inter-American Institute for Cooperation on Agriculture (IICA) are exploring synergies to drive technological innovation in agriculture in the Americas in an effort to strengthen food security and mitigate the impacts of climate change.

To that end, a high-level delegation from the Asian country, spearheaded by Kwon Taek-Ruoun, Director General of the Office of Technology Cooperation of South Korea’s Rural Development Administration (RDA), travelled to Costa Rica to meet with Manuel Otero, Director General of IICA.

Other participants at the meeting included Kim Jinhae, Korean Ambassador to Costa Rica, and researchers, extensionists and representatives of KOICA, the Korean International Cooperation Agency.

The RDA works primarily to increase competitiveness, develop eco-friendly farming, ensure the well-being of producers and share and develop technology on a global level.

Kwon Taek-Ruoun stated that South Korea wishes to strengthen its cooperation in technology transfer for the future of agriculture, innovation and rural digitalization.

“Our country has undergone a major transformation in the past 50 years. In this process, food was a key factor and we made a huge effort to turn a lack of food into an excess and we want to share this knowledge with the international community”, commented the official.

Ambassador Kim Jinhae called for multilateral cooperation, assuring that “policies and other efforts are necessary, but science is the key to finding solutions”.

The Office of Technology Cooperation is attached to the RDA and is charged with establishing strategic partnerships with other countries and international organizations to address the world’s most pressing problems, such as food security and climate change.

The RDA has strived for technological cooperation with international organizations. Joint research and international symposiums, along with world-renowned academics, have favored the development of cutting-edge technologies.

The Administration has sent researchers to international institutions for mutual collaboration and has also trained foreign experts. It joined international treaties like the Convention on Climate Change and Convention on Biological Diversity to support the “Low-Carbon Green Growth” initiative in the agricultural sector.

In the Americas, it is currently implementing adaptable technology projects in developing countries, including the Dominican Republic, Ecuador, Peru, Brazil, Bolivia and Paraguay. It is also working with research institutes on genetics and new technologies for agriculture in the United States, Mexico, Peru and Brazil within the framework of the Korea-Latin America Food & Agriculture Cooperation Initiative (KoLFACI).

Strengthening relations with the Korean Cooperation gains importance in the context of the efforts made by the countries of Latin America and the Caribbean to develop projects aimed at climate-resilient farming through IICA, which was recently accredited by the Green Climate Fund with headquarters in the Asian country. The Korean agency KOICA has also been accredited.

Manuel Otero, Director General of IICA, stated that the alliance with South Korea and the country’s agricultural experience can contribute to improving the quality of life of the rural communities in the Americas.

“Our countries are moving toward low-carbon farming, in which we are building bridges to the environment, but always with our producers at the center. The challenge is finding how to work together—you have the technology and we have a close relationship with the governments and ministries of agriculture, so we complement each other perfectly”, stated Otero.

At the Institute’s headquarters in San Jose, the Korean delegation toured the Interpretive Center for Tomorrow’s Agriculture (CIMAG) and the Fab Lab for technological innovation, both initiatives in which IICA demonstrates how new technologies can transform farming in the Americas and how the sector can contribute to job and entrepreneurship opportunities for rural youth.

Featured Image – The Korean Ambassador to Costa Rica, Kim Jinhae (second from left); the Director General of the Office for Technological Cooperation of the Korean Rural Development Administration (RDA), Kwon Taek-Ruoun, and the Director General of IICA, Manuel Otero, visited the Interpretation Center of Tomorrow for Agriculture (CIMAG) and the Fab Lab Digital Manufacturing laboratory at IICA’s headquarters in San José.