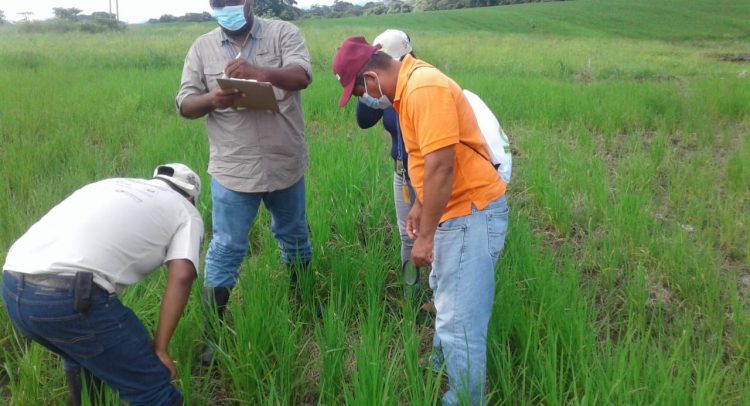 San Jose, 4 May 2021 (IICA). Overall, 64 Panamanian rice farmers received training in the implementation of sustainable and climate-adapted agricultural practices, while reducing costs, increasing output, lowering input use and improving natural resource use efficiency. Training was also provided to 143 Salvadorian livestock farmers, who are working to reduce their carbon footprint and greenhouse gas (GHG) emissions. These are just some of the results of the “Support for the Formulation of Appropriate Mitigation Actions in Central American Agriculture” project.

The initiative, launched in June 2019, is part of the EUROCLIMA+ program, funded by the European Union (EU). The Inter-American Institute for Cooperation on Agriculture (IICA) is jointly executing the project with the German Agency for International Cooperation (GIZ) and Expertise France, in close collaboration with Panama’s Ministry of Agricultural Development (MIDA) and El Salvador’s Ministry of Agriculture and Livestock (MAG).

Gerardo Escudero, IICA Representative in Panama, reported that, “The project has a significant resilience component, as it is promoting sustainable actions to develop and transform the reality of farmers, their communities and their contribution to society and the environment. For example, it is increasing the food supply, lowering costs and boosting farmers’ incomes, while reducing greenhouse gas (GHG) emissions and the use of natural resources”.

Actions to benefit the rice sector in Panama are being undertaken in Chiriquí, Veraguas, Los Santos, Coclé, Eastern Panama and Darién, whereas activities in El Salvador are focusing on the livestock sectors in Morazán and Chalatenango. Total investment in the project is USD 1 126 000.

One of the most noteworthy achievements in Panama includes the registration of the rice production Nationally Appropriate Mitigation Action (NAMA) in the Biennial Update Report on Nationally Determined Contributions (NDCs) of the agriculture sector to the United Nations Framework Convention on Climate Change (UNFCCC).

NDCs are commitments undertaken by the international community to reduce GHG emissions.

Moreover, 64 rice farmers and 34 technical officers from the five regions where the program is being implemented were able to expand their knowledge during 17 field school sessions, covering topics such as rice agroecosystems; soils; conservation tilling; seed selection, management, disinfection and inoculation; as well as diagnosis and integrated management of weeds, pests and crop diseases, to name a few.

This facilitated a 35% increase in their income, by reducing per hectare production costs by 15%. The project is aiming to train 250 producers and 25 technical officers.

Other highlights include the preparation of two documents to serve as input for the revision of agricultural protocols regarding the Climate-Adapted Rainfed Rice Production (PASAC) system—utilizing no irrigation and relying on the May to October rains—and the Climate-Adapted Irrigated Rice Production (PARSAC) system, which is not rain-dependent and is implemented on irrigated plots from November to April.

The documents are guides that a rice production trainer can utilize to instruct farmers how to achieve sustainable, resilient, climate-adapted and low-emission production, using both systems.

Most notably, the project also includes a social welfare component, as it will train inmates in the country’s La Joyita Prison in low-carbon rice cultivation techniques.

In El Salvador, 143 livestock farmers (36% women and 64% men) and 25 technical officers from the Morazán and Chalatenango departments completed 10 field school sessions, receiving training on climate change; the establishment of living fences for fodder and the use of improved pastures; establishment of protein-energy banks; paddock division; grazing periods, as well as the management of cow manure using the Californian red earthworm, among other topics.

The aim is to train more than 200 livestock farmers by the end of the project and to build awareness among 700 people who depend on livestock production, with respect to appropriate mitigation actions in this production activity.

Moreover, technical and scientific measurement of GHGs is currently taking place on 11 farms in the zones where the initiative is being implemented, which will greatly assist efforts to develop the livestock NAMA.

The list of results also includes the preparation of a document on low-carbon livestock production, as well as material that will be used by livestock farmers for guidance and consultation purposes.

The “Support for the Formulation of Appropriate Mitigation Actions in Central American Agriculture” project will end in November of this year, but has already received approval for a further five month-extension, which will allow for the expansion of the initiative beyond the initial binational scope.