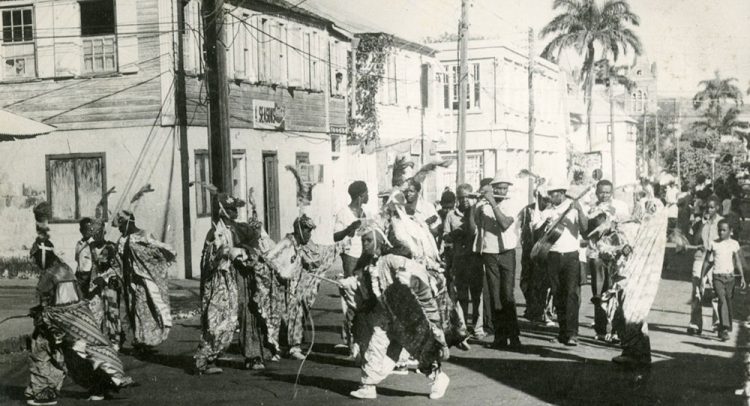 The Survival of the Christmas Sport

For two weeks at Christmas time, St Kitts comes alive to the rhythm of the big drum and string band, and the shrill notes of the fife as town and country are visited by troupes of the Masqueraders, Actors, Mummies, Moco Jombie, Clowns, and of course the Bull. There was a time when these troupes presented a much wider variety of performances but gone forever are David & Goliath, the Cake Walk, and Neaga Business. these troops were often lead by men like Longliner and Lalaps who came from the working class – a class of people who because of a lack or academic education was not usually associated with leadership capabilities.

For the plantation workers, who were always regimented on the estates this was a time to “Leh go”. It was a time when they could make fun of the social sins of the planters and the overseers and the white population in general. The often vulgar behavior of the performers became a subject of resentment among the emerging black intelligentsia. They feared that their blackness and their Creole origins would put them on a par with the performers in the eyes of the white administration and that this would diminish their potential to gain status in a white dominated society.

It was from the Black, middle class Intelligentsia that Manchester, Challenger, Sebastian, Harney, John and Seaton emerged to become leaders of a strong Labour Movement. Eventually the roll of leadership was passed into the hands Robert Bradshaw, himself a factory worker. He too adopted the attitude of the Intelligentsia towards the sports as like his predecessors he needed to convince the white colonial administration of his ability to lead. He and his comrades France and Southwell saw it as their mission to elevate the same class from which they came and therefore criticized the Christmas sports. Bradshaw in particular resented the fact that money was thrown at the performers by the audience, especially a white audience. He saw in it an act of humiliation and encouraged the people to put an end to the practice.

The Labour Movement and the Intelligentsia supported the police in their efforts to monitor and control these sports because they both shared the concern with regards to the violence, which often accompanied the performances. They were also very much aware of the fact that the Christmas sports, and the Neaga Business in particular, turned the indiscretions of the planters class and their associates into caricatures and vulgar street comedies. There was always the fear that they could be next. Furthermore, both performers and spectators often used the sports as a means of settling old scores with individuals with whom they might have had some sort of confrontation earlier in the year.

The forces that were placing the Christmas sports in jeopardy were as varied as the sports themselves. During the first half of the 20th century there were numerous migrations to Bermuda and the Dominican Republic, in particular, of men in search of employment. They carried with them the tradition of the sports, but this also meant that there were fewer performers in St Kitts. In the 1950’s a fresh wave of migration was largely directed towards England, which is of such considerable distance that persons could not afford to return to St Kitts on a regular basis. D. L. Matheson attempted to stem the tide that was overtaking the Christmas sports by organizing competitions in the park but his success was limited. It was at this time that performances like David and Goliath and the Cake Walk disappeared for good.

It was also at this time that Basil Henderson, Secretary of the Steel Pan Organization, returned from Trinidad with the idea of introducing a carnival based on the Trinidadian model. This type of street performance was fast becoming a trend in the Eastern Caribbean. The idea was embraced by the upper classes of society because they saw in it a possibility of an economic recovery by attracting visitors to St Kitts. However with the introduction of Carnival, the traditional Christmas sports were pushed into background and the public interest was directed towards the Queen Shows, Calypso, and street jamming. It does not seem to have been Henderson’s intention that the sports should disappear as he did his best to include Clown troupes in the visits of the Steel Bands to the Virgin Islands

Carnival did not make its appearance without objections. These came mainly from the churches. Henderson was a devout Catholic and he quietly saw his role slip out of his hands as the controversy grew. William Herbert Senior stepped into the fray with what he called the Christmas Festivities. These included attempts to revive the Masquerades but his close association with the planters rendered his efforts unsuccessful. He was the Public Relations Officer of the Sugar Association, which spoke for the planters, the same people who on a day-by-day basis exploited the estate workers.

With the introduction of National Carnival in 1971, the organizing committee focused its efforts on the organization of queen shows and calypso shows forcing the traditional Christmas sports to adopt an insignificant role. They continued to survive as street performances, but no special attention was given to their survival. It was through the efforts of persons like Zack Nisbett, at the time a leather worker who performed the Bull and encouraged other acts to continue their performances that the Christmas sports survived.

It was a trend that continued right up to independence on 19th of September, 1983. The new nation was then looking for an identity and a means of promoting itself as a tourist destination. It was the shared view of many that the Masquerades and the Christmas sports as a whole were so unique to St Kitts and Nevis that they were an attraction and a rallying point. At the same time, a book entitled “the Christmas Sports of St Kitts and Nevis: Our neglected cultural tradition” by Frank Mills and Simon Jones Hendrickson was published giving detailed descriptions of the Christmas sports and emphasizing the need to preserve them as a means of cultural expression. The educational institutions became involved. Kindergartens and primary schools including the teaching of Masquerade dance as part of their activities, especially around Christmas time. Individuals began hiring Masquerade groups and string bands to perform at private parties outside of the Christmas season. The Ministry of Tourism and the Hotel and Tourism Association started hiring groups to welcome in cruise ships and open the celebrations of tourism week.

In 1995 a vibrant department of culture started a registration for folklore groups, making them an integral part of the carnival parade and started standardizing the fees for their performances. Today the Christmas sports have become a commercial venture and are no longer a matter of fun and a release of tension as they once served in the past. They are regarded as an organized business, performing at the best hotels on the island and on numerous occasions throughout the year. There has been a significant increase in the number of performances and troupes with the result that their future seems brighter and their survival seems to be ensured.