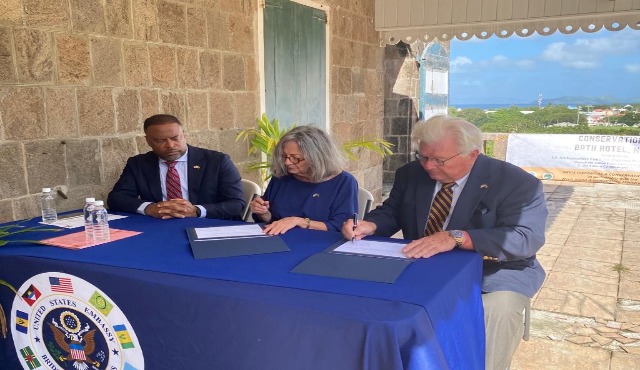 The United States Embassy has provided a grant totalling more than US$108,000 to the Nevis Historical and Conservation Society for a project to conserve and stabilize the Bath Hotel and the Hermitage Inn in Nevis.

The project will include engineering works that include repairs to electrical wiring and plumbing, sealing of the roof, repairs to any windows and doors by skilled carpenters as well as the repointing of the stonework where necessary by a master mason.

The Ambassador’s Fund for Cultural Preservation is a highly competitive program that receives proposals from cultural museums, ministries of culture, NGOs, and other organizations around the world for a limited number of sponsorships.

Through the AFCP Grants Program the United States supports the preservation of archaeological sites, historic buildings and monuments, museum collections, and forms of traditional cultural expression, such as indigenous languages and crafts by providing funding to carry out an individual project to preserve cultural heritage in a specific priority country.

Photo: U.S. Ambassador to Saint and Nevis, Linda Taglialatela (center) and Richard Lupinacci, President of the Nevis Historical and Conservation Society sign the Memorandum of Understanding as the Premier of Nevis, Hon. Mark Brantley looks on.