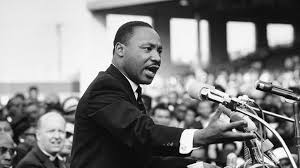 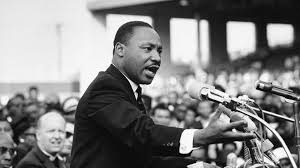 On April 4, 1967, a Tuesday, Martin Luther King Jr. took the pulpit at New York’s Riverside Church, the great Gothic cathedral conceived by John D. Rockefeller Jr., to deliver a speech entitled “Beyond Vietnam: A Time to Break Silence.” It announced a decisive shift in King’s message and ministry, from desegregation to a broader engagement with pacifism and social and economic justice. And it marked the beginning of the final year of his life. Exactly one year later, the concerns he spoke to that day would lead him to support a strike by sanitation workers in Memphis, Tenn., where he was shot and killed.

“I come to this great magnificent house of worship tonight because my conscience leaves me no other choice,” he said at the beginning of his talk, before a crowd of more than 3,000 that filled the immense church. “A time comes when silence is betrayal. That time has come for us in relation to Vietnam.” He went on to describe how Great Society antipoverty programs, “the real promise of hope for the poor, both black and white,” had been left “broken and eviscerated” by the costs and the social divisions imposed by the war. “We [are] taking the black young men who had been crippled by our society and sending them eight thousand miles away to guarantee liberties in Southeast Asia which they had not found in southwest Georgia and East Harlem. … We have been repeatedly faced with the cruel irony of watching Negro and white boys on TV screens as they kill and die together for a nation that has been unable to seat them together in the same schools.” He invoked his ministry, “in obedience to the one who loved his enemies so fully that he died for them.” And in his summation, he quoted from one of his favorite hymns, written more than 120 years before by the abolitionist James Russell Lowell:

Opposition to the war was not a new position for King, although it may have been news to some of his followers. Two years before, he had expressed his view that military action in Vietnam was “accomplishing nothing,” but that came in a question-and-answer session after a speech, and it attracted little attention. As the war escalated through 1965, the board of the Southern Christian Leadership Conference authorized him to pursue his own peace initiatives, drawing a warning from an assistant secretary of labor, George Weaver, described by the New York Times as “one of the highest-ranking Negroes in the Johnson administration,” that he risked provoking a “miscalculation” by the North Vietnamese or their patrons in the Soviet Union or China.

So he understood the risk he was taking. He would be breaking decisively with Lyndon Johnson, the president who had done more than any other since Lincoln to advance civil rights. He was being challenged on the left by a new generation of Black Power advocates and harassed by J. Edgar Hoover, whose covert efforts to discredit and destroy King would get new ammunition from his association with the people derisively called “peaceniks.” Peace activists were often labeled “Commies” in those years, and it was King’s long association with the left-wing activist Stanley Levison, whom Hoover suspected of being a Soviet agent, that brought King under FBI surveillance in the first place. Ironically, as the historian Taylor Branch points out, Levison was actually opposed to King’s involvement in antiwar causes and tried to talk him out of giving his Vietnam speech. (“I lost,” Levison told associates, in a wiretapped phone call, “and we’ll just have to live with the consequences.”)

But King was being pushed in the other direction by another influential aide, James Bevel, a fiery preacher from Mississippi, who saw the Vietnam War as an extension of America’s oppression of nonwhites. (Ironically, after King’s death, Bevel would become a supporter of Ronald Reagan and later drift to the fringes of politics as the running mate of perennial presidential candidate Lyndon LaRouche.) And King was pushed, more than anything else, by the logic of his own commitment to nonviolence. How, he wondered, could he demand that his own people brave police clubs and dogs without striking back, and not denounce the bombs the United States was dropping on children on the other side of the world? “It has been my consistent belief and position that non-violence is the only true solution to the social problems of the world and of this country,” King wrote a supporter just before the Riverside speech. “The principle of love which has motivated so many to strike out against the evils of racism here in America must motivate us to protest the brutal destruction of the Vietnamese People.”

In the spring of 1967, King, notwithstanding his 1964 Nobel Prize, was not quite the towering figure we look back on today. The great victories he had helped win — the Civil Rights Act of 1964, the Voting Rights Act of 1965 — were receding into the (recent) past. The SCLC was in disarray and debt. King’s effort to tackle racial segregation in the North was foundering on the discovery that housing was a much more complicated and nuanced issue than whites-only lunch counters. King’s antiwar activism, while popular among the antiwar left, wasn’t winning many converts even among his allies in the civil rights movement, some of whom supported the war on principle, while others worried it would dilute his message about race. Within days of King’s speech the leading mainline civil rights group, the NAACP, disassociated itself from his stance, with a declaration that “we are not a peace organization nor a foreign policy association. We are a civil rights organization.” An editorial in the New York Times on April 7 (“Dr. King’s Error”) chastised King, in measured Times-speak, for making “too facile a connection between the speeding up of the war in Vietnam and the slowing down of the war against poverty.”

King’s life was already hectic and was about to get more so. He spent his last year crisscrossing the country in a whirl of speeches, sermons, meetings, rallies and marches. David Halberstam, who profiled him in the summer of 1967 for Harper’s magazine, noted that “most of King’s life is spent going to airports, and it is the only time to talk to him.” The period has been chronicled in a number of places, notably including the final volume of Branch’s magisterial trilogy on King’s life, “At Canaan’s Edge,” and a new HBO documentary, “King in the Wilderness.” Local newspapers reported on his visits whenever he touched down, in articles that make for arresting reading 50 years later, with their casual references to “Reds” and “Negroes,” which is the word King himself used. (It would be another year before the Amsterdam News, Harlem’s leading publication, totally banished the term in favor of “blacks.”) A partial list of the places King visited during that year includes, besides New York and his home in Atlanta: Boston; Los Angeles; San Francisco; Chicago; Cleveland; Philadelphia; Washington, D.C.; Miami; Grinnell, Iowa; Clarksdale, Marks and nearby towns in Mississippi; Geneva, Switzerland (for a world peace conference); Newcastle upon Tyne, England (to receive an honorary degree); Acapulco (for a two-day vacation); and, of course, Memphis. Along the way he rebuffed appeals to run for president as a peace candidate, served a five-day sentence in the Birmingham, Ala., jail, was accused by Hoover, in a secret report to Johnson, of plotting to blow up the Chicago Loop, and was bequeathed the entire estate — amounting to less than $10,000 — of the New Yorker writer Dorothy Parker, who admired him although they had never met.