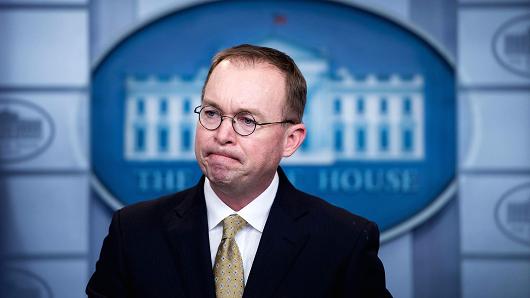 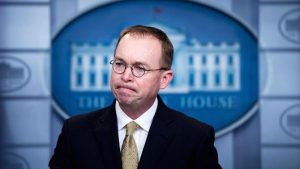 The White House is preparing to release a budget Monday that will not balance, according to a person familiar with the document, reversing the administration’s previous stance and casting aside a point of pride for conservatives.

The shift away from a balanced budget occurred even before President Donald Trump signed into law Friday morning the massive $320 billion spending deal hashed out between Republicans and Democrats on Capitol Hill.

In the original version of the budget, which was completed in mid-January, lower federal revenues due to steep tax cuts, combined with higher mandatory spending on entitlement programs, resulted in deficits throughout the next decade, according to the source.

The new bipartisan spending deal from Congress only exacerbates the problem. According to the Center for a Responsible Federal Budget, deficits will top $1 trillion next year under that agreement and could reach $2.1 trillion by 2027 if it becomes permanent and U.S. interest payments rise.

A senior official at the Office of Management and Budget said earlier Friday that Monday’s proposal will reflect the new spending limits. The White House budget will also include a “road map” for offsetting the growth in spending “in a responsible manner,” the official said.

Presidential budgets are not binding documents but vision statements outlining an administration’s priorities and principles. Proposing a budget that does not balance amounts to a tacit admission of the challenging political realities facing a party that had long defined itself by fiscal prudence. OMB Director Mick Mulvaney had been a staunch deficit hawk and a member of the conservative House Freedom Caucus while he served in Congress, and previously supported a balanced budget amendment to the Constitution.

Continuing to add to the nation’s deficits is also not likely to sit well with his former colleagues in Congress, many of whom voted against the spending deal but have supported other key White House initiatives. Outside groups such as Heritage Action and FreedomWorks have also decried the measure.

“Grassroots conservatives are used to getting the status quo from politicians who say they stand for fiscal responsibility, but this is beyond the pale,” FreedomWorks spokesman Jon Meadows said in a statement. “Republican leadership has broken with the status quo and is taking giant steps toward fiscal insanity.”

The White House budget is also expected to include economic projections that are in line with its previous forecasts. In last year’s budget, the administration predicted growth would rise to 3 percent by 2021 and stay there. That assumption, which many economists criticized as overly optimistic, was key to ensuring that federal revenues kept pace with spending.

The administration has also repeatedly argued that the $1.5 trillion tax cut passed last year would eventually pay for itself. However, officials recently acknowledged that it could add to the deficit in the short term. A drop in tax receipts resulting from the new law forced the Treasury Department to increase its first-quarter borrowing and moved up the timeline for hitting the federal debt ceiling. The new spending agreement calls for the debt limit to be suspended until March 2019.

Last year’s White House budget also featured dramatic reductions in spending on domestic programs – $3.6 trillion in cuts to the Environmental Protection Agency, the Education Department, Medicaid, food stamps and federal student loans, among others. The person familiar with this year’s plan said those reductions will largely remain in place.