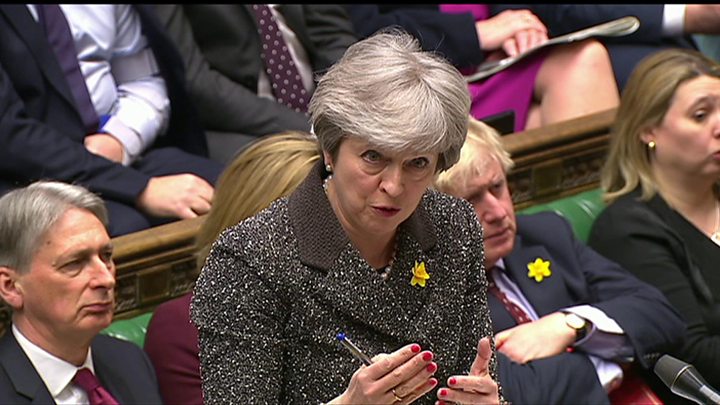 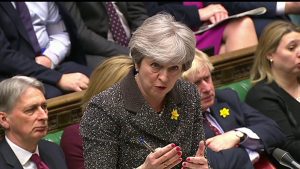 An EU proposal for the Northern Ireland border threatens the “constitutional integrity” of the United Kingdom, Theresa May has said.

The EU’s draft legal agreement proposes a “common regulatory area” after Brexit on the island of Ireland – in effect keeping Northern Ireland in a customs union – if no other solution is found.

Mrs May said “no UK prime minister could ever agree” to this.

The EU says the “backstop” option is not intended to “provoke” the UK.

Unveiling the draft agreement on what has proved to be a busy day for Brexit news, EU chief negotiator Michel Barnier called on the UK to come up with alternatives.

He said the text was “no surprise” and was just a legally-worded assessment of what had been agreed in the negotiations so far.

What the EU’s draft document says

The EU’s 120-page paper covers the issues which have been negotiated so far – including the UK’s financial settlement, citizens’ rights and the future of the border between Northern Ireland and the Republic of Ireland – which is a member of the EU – after Brexit.

On how to avoid border checks in Northern Ireland, the EU says a “backstop” is needed in case neither of the UK’s preferred solutions can be found.

This would involve an “area without internal borders in which the free movement of goods is ensured”, covering customs, VAT, energy, agriculture, goods and other sectors, across the island of Ireland.

“The territory of Northern Ireland… shall be considered to be part of the customs territory of the Union,” the document says.

Other options – a UK-EU deal that means checks are not needed and technological solutions for a “virtual” border – will also be explored.

The prime minister was responding to a question from David Simpson of the DUP, which gives the government the Commons support it needs to win key votes in the House of Commons.

Earlier the DUP’s Westminster leader Nigel Dodds said his reaction to the publication was one of “amazement” that the EU thought it “could possibly fly with either us or the British government”.

“We did not leave the European Union to oversee the breakup of the United Kingdom,” he told the BBC, adding that it would be “catastrophic” for Northern Ireland to be “cut off” from UK markets.

Conservative Brexiteers have also said it is “completely unacceptable” and would effectively annex Northern Ireland.

But Labour said: “The EU-UK government war of words needs to end.”

“Theresa May’s failure to offer any viable solution to the border in Northern Ireland has come back to haunt her,” added shadow Brexit Secretary Sir Kier Starmer.

Wasn’t all this agreed last year?

In December both sides came up with an agreement that Downing Street hailed as a “breakthrough” and meant the EU agreed to move talks on to the next phase.

It included a promise to avoid a “hard border” between Northern Ireland and the Republic.

But the EU says that the next phase of negotiations – which includes drawing up a post-Brexit transition and opening trade talks on permanent post-Brexit relations – can only progress if December’s agreement is “translated faithfully into legal terms as quickly as possible”.

And doing this has reopened the debate about the Northern Ireland border.

Downing Street said that overall the negotiations were “progressing well”, adding that “it would be surprising at this point if we did agree on everything”.

The Irish government said the publication was “another important step in the Brexit negotiations”.

Ireland’s foreign affairs minister Simon Coveney said the “backstop” option was “very much a default and would only apply should it prove necessary”.

Labour says it would solve the Irish border question by entering into a new customs union with the EU, meaning checks are not needed as people and goods pass between Northern Ireland and the Republic.

As well as the Irish border, another area of contention is the role of the European Court of Justice (ECJ).

The UK has said it will leave the ECJ’s jurisdiction and regain control of its laws after Brexit.

According to the EU’s draft document, disputes over the Brexit agreement in future years would be settled by a “joint committee” made up of representatives from both sides.

But the EU proposes that this committee would be able to refer to the European Court of Justice for a binding ruling – with the EU’s court having the power to levy a fine or suspend parts of the Brexit treaty.

The EU is also insisting that EU citizens who arrive in Britain during the transition period have the same right to stay in the country as those who arrived before Brexit – the UK has previously suggested it will contest this.

Mr Barnier stressed that the document was a draft and would now be circulated among the 27 other EU nations and the European Parliament’s Brexit steering group for revision and agreement before being placed on the negotiating table.

UK negotiators will work with the EU to see how December’s commitments can be translated into legal form, Theresa May said.

Attention will then soon turn to Friday, when the prime minister is to make a speech setting out the UK’s strategy for the next phase of negotiations.

Key to this will be how closely the UK seeks to stay to EU rules in order to maintain a close trading relationship.