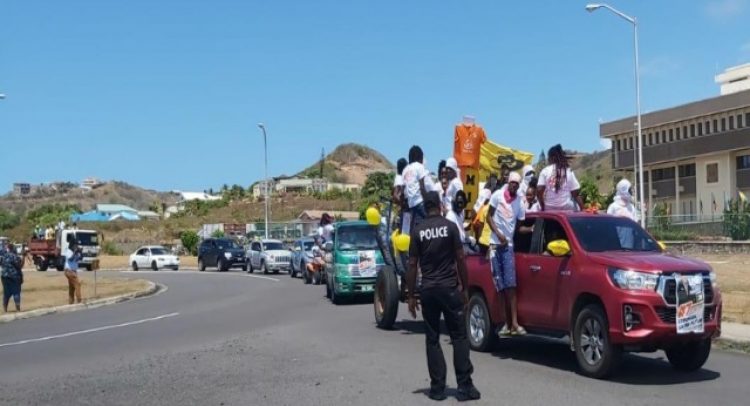 Basseterre, Sunday 7th June, 2020, (MyVue News.com) – One of the defining symbols of an election victory in St. Kitts and Nevis, is a motorcade.

And this was quite evident on Saturday, when all political parties and their supporters, staged their own versions.

Even the two latest declared victors, Eugene Hamilton and his entourage, took to the streets Saturday night, shortly after the final count was announced, giving him a 24 margin victory.

Only hours before that, Labour’s Geoffrey Hanley, had his celebrations, immediately after the decision was made that he had been declared winner.

There were also motorcade celebrations in every constituency won by the various candidates.

With those preliminary political convoys out the way on Saturday, and all the results in, thousands are now packed in vehicles of all types, slowing making a Sunday afternoon crawl, around the island of St. Kitts.

They are decked in their favourite party colours, waving flags and enjoying the party mix of campaign songs.

Traditionally, the day after an election has been a holiday, but that was not the case on Saturday, perhaps because results remained outstanding.

Now, some in the public are lobbying for “their” holiday on Monday, but up to the time of this report, no decision had been announced.

This was confirmed on Sunday morning by Prime Minister Timothy Harris, while being sworn in at Government House.

No date has been announced as yet also, regarding the portfolios to be allocated to the newly elected Members of Parliament, who are also likely to serve in the Executive Branch of this Cabinet of Ministers.

That will come when the inauguration is held and the date for that has not yet been released but is expected very shortly.