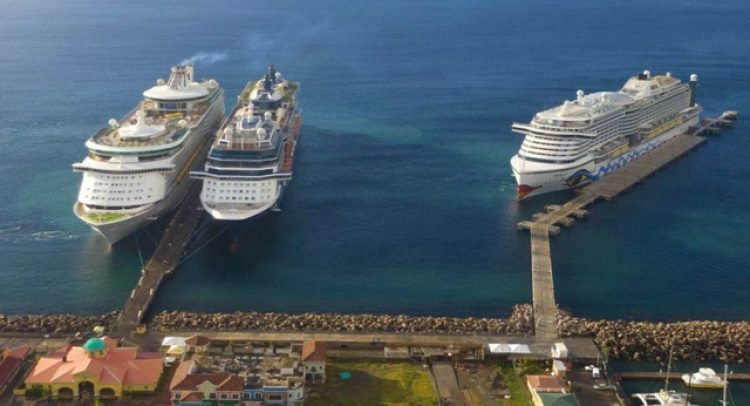 Basseterre, St. Kitts, November 17, 2021 (SKNIS): The Federation of St. Kitts and Nevis celebrated the return of three cruise ships to Port Zante in Basseterre on Tuesday, November 16, 2021. The simultaneous berthing marked the first time that three ships were docked in over 20 months – since March 2020.

Acting Prime Minister, the Honourable Shawn Richards, welcomed AIDAperla, Captain, Boris Becker and crew, as well as its guests to St. Kitts and Nevis. He noted that three ships docking in the Federation on the same day is significant.

“This is a momentous occasion for the entire country because it reflects continued confidence that our cruise line partners have in this beautiful Federation,” said Acting Prime Minister Richards, during the Plaque Exchange Ceremony on November 16. “Since July 22 when we welcomed back Seabourn Odyssey, we have had 21 cruise ship calls from various cruise line partners, inclusive of our three calls today. We continue to move forward in the right direction.”

The 21 calls made to date include ships from several cruise lines such as Holland America; Mystic Cruises; AIDA Cruises; Celebrity; Viking Cruises; Royal Caribbean and Carnival.

AIDAperla had 1,675 passengers, Celebrity Equinox 1, 835 and Explorer of the Seas 1,794 bringing the total to 5,304.  According to data from the St. Kitts Tourism Authority, during November St. Kitts will receive 28 cruise calls with an estimated total of 72,163 passengers. Fifty-one (51) calls are scheduled for December equating to 119,146 projected passengers.

Featured Image – The Federation of St. Kitts and Nevis celebrated the return of three cruise ships to Port Zante in Basseterre namely the Celebrity Equinox, Explorer of the Seas and  AIDAperla, on Tuesday, November 16, 2021.