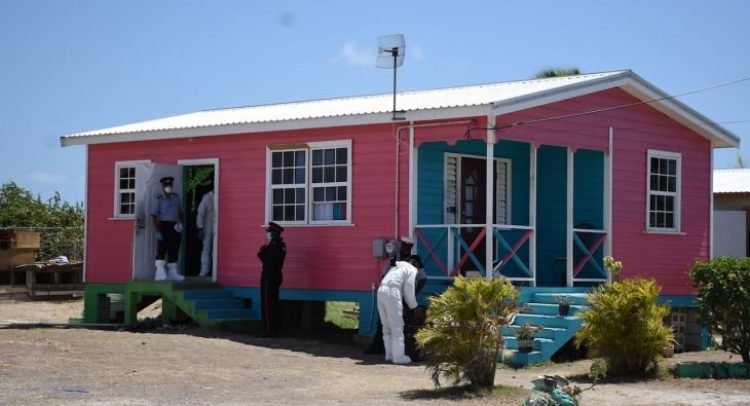 Three execution-style murders including that of a 42-year-old mother has shaken the foundation of a quiet, closely-knit St Philip community leaving residents stunned by the blatant disregard for human life.

Thursday morning’s first few minutes were interrupted by rapid and continuous gunfire at a house in River Land where five people – three men and two women were staying. When the brazen slaughter was finished, only two people were still alive. The others lay dead, reportedly with gunshot wounds to the head.

“I was in my bedroom after 1 o’ clock and I heard ‘pax pax pax’ all the time. It stopped, then it started back again and restarted and we heard it again and we stayed put and then we heard the son hollering for my boyfriend,” recalled next door neighbour, Latrina Sobers.

“We looked out and someone said ‘call the police’ saying that his entire family is dead,” said Sobers, who had been trembling and speechless just hours before.

Family matriarch, National Conservation Commission (NCC) employee, Daile Sutton, her 24-year-old son Keno Sutton and Kyle Parris, 23, who many described as Daile’s son-in-law were all slayed in the fifth hour of Barbados’ 8 p.m. to 5 a.m. curfew. The slain mother’s daughter and another son survived the incident and are mourning with another daughter, who does not live at the family home.

Details of the incident were strikingly similar to those which unfolded at Rices in the same parish last March, when 52-year-old Betty Mayers was gunned down along with her son Jamal as two young boys, ages 6 and 11 scampered to safety.

On the most recent occasion, Avril Greaves, Daile’s uncle, described the 42-year-old mother as a friend to everyone in the community.

“The other side of her family is taking it even worse. Everyone is crying and they’ve got me crying too. She is very friendly to every one up here. I don’t know what was going on otherwise,” Greaves told Barbados TODAY.

He revealed that Daile had just recently returned to work after the 24-hour Government imposed shutdown due to Coronavirus concerns.

“She went back out to work just last week and she had already started buying paint because she took pride in her house,” he added.

When asked why anyone would want to target the family, he said: “The truth is that everything has a cost. But the victims would be the only ones who can tell you why it happened. Either way, there is no reason for killing people like this.

“We would like to find the persons that did it, because even though they came for whoever they came for, they should not have come for her. She has been a friend to everyone out here,” he added.

While not many people are familiar with Kyle Parris, some remembered Keno Sutton as a young man who did odd jobs and was usually very pleasant.

Another resident, who requested anonymity, told Barbados TODAY she was concerned that the ongoing curfew has made the community, which was usually lively at night, a target for cowardly criminals.

“So if anybody were going to come and shoot, they would have to shoot on the outside. But because the curfew was going on, … it seems the person who did it was very intentional and to shoot them in their head confirms that,” she added.

“Not many people know about River Land. So I was shocked about this triple murder.”

Caught in Trump-China feud, WHO leader under siege