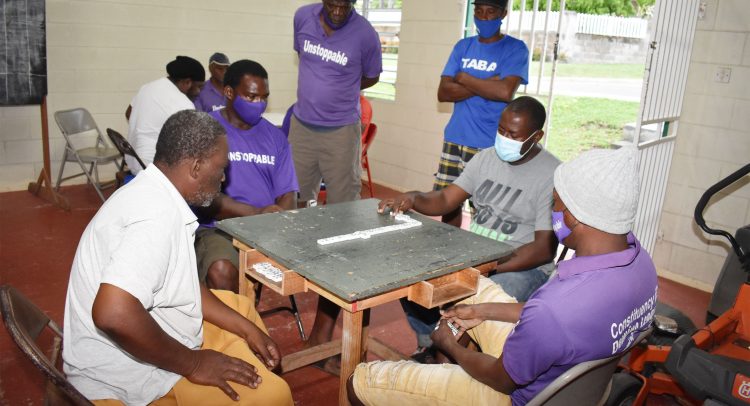 Three teams have as at Sunday September 27 assured themselves of slots in the final four in the 25th edition of Constituency Number Seven Dr the Hon Timothy Harris Domino League.

Former champions Unity Domino Club and Tabernacle Domino Club each with one game to play, and Phillips Domino Club with two games to go have earned enough points to the extent that even if they were to lose the remaining fixtures they would still claim three of the final four slots.

This follows the Sunday September 27 results where Unity dispatched Sylvers Domino Club 14-4 at Cuban Bar in Lodge Project, and Tabernacle beat Unstoppable 13-9 in their game played at the Edgar Gilbert Sporting Complex pavilion in Molineux. On the other hand, Phillips earned a 13-0 walkover win after their opponents Saddlers Domino Club could not raise enough players for their game scheduled at the Tabernacle Police Station.

Defending champions, Parsons Domino Club also collected maximum points from a 13-0 walkover win after Guinness Domino Club, whom they were supposed to come up against at the Edgar Gilbert Sporting Complex pavilion in Molineux, failed to raise enough players.

Former champions Lodge Domino Club and Giants Domino Club were due to have met at the Lodge Community Centre, but they amicably rescheduled the game to today Monday September 28 at the same venue starting at 7:00 pm.

*Unity, *Tabernacle, *Molineux, and *Guinness have played one game more than the other teams whose games were affected by a power outage experienced in most parts of the island on Thursday September 17, while **Lodge and **Giants have a game to be played today Monday September 28.

The thirteenth and last segment of preliminary fixtures in the second round of the 25th edition of the league will be held at the usual three venues tomorrow Tuesday September 29, with all games starting at 7:00 pm.

Tabernacle Police Station will be the venue for Lodge vs. Christ Church, and Molineux vs. Saddlers games; Lodge Community Centre will host Small Corner Bar vs. Parsons, Unstoppable vs. Guinness, and Tabernacle vs. Sylvers games; while Edgar Gilbert Sporting Complex pavilion will host Giants vs. Phillips, and Mansion vs. Unity games.

However preliminary fixtures come to an end on Thursday 1st October when the five games that were rescheduled as a result of a power outage will be played.

Lizzo says body positivity has become too 'commercialised' and 'cool'

Heat take down Celtics, move on to NBA Finals