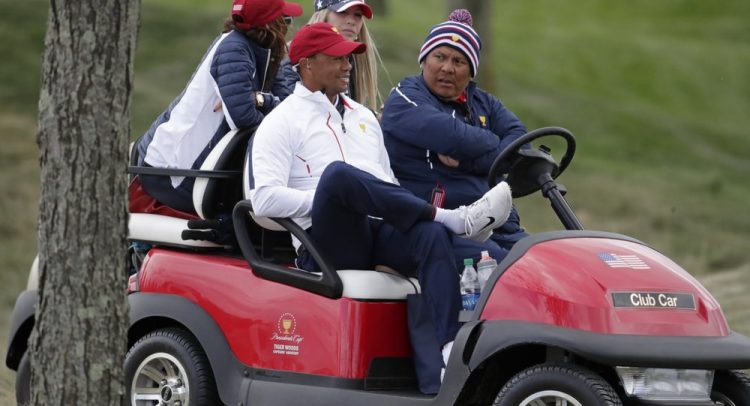 Tiger Woods is everywhere in this President Cup

The role of Presidents Cup captain typically is reserved for players in the twilight of their careers.

Nothing is typical about Tiger Woods.

Six months after he was appointed U.S. captain, he won the Tour Championship and nearly captured the FedEx Cup. While picking out team uniforms and choosing vice captains, Woods won the Masters. As he was contemplating which four players to take as captain’s picks, he won in Japan for his record-tying 82nd career PGA Tour victory.

Captain or player for the Dec. 12-15 matches at Royal Melbourne in Australia?

“It’s a lot of moving parts, but something I’ve been looking forward to for a long time,” Woods said.

He is the first playing captain since Hale Irwin in the inaugural Presidents Cup in 1994, and the first captain to pick himself. Irwin won at Hilton Head that year at age 49 and qualified for the team. Woods won twice this year and is No. 7 in the world, filling out a U.S. team with all 12 players among the top 25 in the world ranking.

And with that, the long odds facing the International team got a little bit longer.

Not even the Ryder Cup with all its history started out so one-sided. The International team, cobbled together with players from countries outside Europe, has managed to only one victory in the 25-year history of this event. It was such a blowout last time at Liberty National that he Americans were one match away from ending it on Saturday.

Leading the way for the International team is Ernie Els, who has finished runner-up to Woods more than any other player.

The Big Easy cares more about opportunity than history.

In his favor is the course and the home crowd.

Royal Melbourne is where the International team registered its only victory in 1998, a beating so thorough that Nick Price won the decisive point in the second of 12 singles matches. That was as good as it would get.

The Americans won big two years later and have been winning ever since except in 2003 in South Africa. That was declared a tie after Woods and Els went toe-to-toe for three sudden-death playoff holes until it was too dark to continue.

Woods won the clinching point at Royal Melbourne in 2011, but it was that one loss — Woods doesn’t forget easily — that he keeps bringing up to his heavily favored team.

“I think it helps having Tiger as a captain, who’s been on a team that has lost at Royal Melbourne,” Gary Woodland said. “He’s talked a lot about that to us. We have five rookies trying to make a name for ourselves, too. And we’re playing for Tiger Woods, which is pretty cool.”

Not only are they playing for Woods, they are playing with him.

Woods was 149th in the world when he was appointed captain, with four back surgeries since his last victory, which some thought might have been his last. Now he is among the top 10 in the world, the Masters champion, a winner in the last PGA Tour event he played.

Woods first carried a radio and rode in a cart as an assistant captain at the 2016 Ryder Cup, and he was an assistant at the last Presidents Cup. His text messages on potential pairings and strategy are relentless. Players who have been around him say he prepares as hard as he ever did for a major.

“I know that he does not want to go down there and not come back without the cup,” said Rickie Fowler, the newest addition to the team. “Tiger means business. He’s not overlooking anything. And I think over the last few years, people have begun to see how much team events do mean to Tiger.”

Fowler was chosen to replace Brooks Koepka, the No. 1 player in the world who is still recovering from a knee injury he aggravated in South Korea in October. Such is the strength of the U.S. team that it dipped all the way down to No. 22 in the world to fill in for Koepka.

The International team, which has only two players with a better world ranking than Fowler, doesn’t have that luxury.

It has seven players who have experienced the Presidents Cup only from in front of a television, tying a record for most rookies. The team Els assembled comes from a record nine countries, four of which have never been represented in these matches — Mexico (Abraham Ancer), Chile (Joaquin Niemann), Taiwan (C.T. Pan) and China (Haotong Li).

Only three of their players have won tournaments this year around the world. Adam Scott and Louis Oosthuizen are the only major champions.

The International team, especially after the beating it took last time, has rarely faced such long odds — or had this big of a chip on its shoulder. They are tired of losing. Scott has played in every Presidents Cup since 2003 and has never been part of the winning side.

Facing Woods as the captain and as a player makes the International challenge even greater.

“He’s the ultimate competitor,” Scott said. “There’s no way he’s not doing everything possible coming down here as a captain and a player to win this event. There’s no way he wants to be the captain to a losing US team. So, it’s going to be very, very difficult but we have to believe we can beat him, because I believe we can.

“It would be great to stick it to Tiger and the entire American team.”

Harris celebrates birthday with goodwill and love of the people