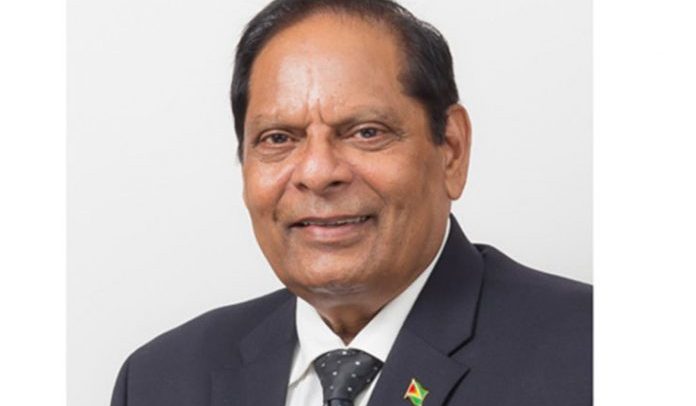 …PM says too many young people are in jail

THE recent jailing of a father of three for the possession of eight grams of marijuana is stirring public debate with Prime Minister Moses Nagamootoo and the Alliance for Change calling for the removal of custodial sentences for small amounts of the herb.

Twenty-seven-year-old Carl Mangal broke down in the Magistrate’s Court Monday after he was given a three-year jail sentence and $30,000 fine. He pleaded guilty to having the substance which, according to the Narcotic Drugs and Psychotropic Substances (Control) Act, carries a fine and jail time of no less than three years and no more than five years.

Prime Minister Nagamootoo said that he believes marijuana penalty laws must be reviewed to address the number of young people being locked up. “I share the view that Guyana should review sentencing guidelines, and liberalise laws that make custodial sentencing mandatory for small quantities of marijuana. Too many of our young people are in jail as the law, as is, provides for imprisonment for quantities above 5 grams and does not give magistrates a discretion.”

Nagamootoo was at the time responding to a post by social media activist Norman Brown who said that he had engaged both Prime Minister Nagamootoo and Minister of Legal Affairs, Basil Williams, about the “unjust sentencing meted out to Mr Mangal by Magistrate (Judy) Latchman.”
Meanwhile, the AFC also expressed its outrage and deep concern following the sentencing, to three years’ incarceration, of the 27-year-old.

“The AFC wishes to make it clear that it is not questioning the decision of the magistrate in any way. The AFC recognises that the magistrate, as is the case with all her colleagues, is constrained by the law with regard to the issue of custodial sentencing for possession of small quantities of marijuana.”

The party, however, renews its call to all legislators to move with alacrity in upgrading the laws of Guyana to ensure that custodial sentences for small quantities of marijuana are removed from the books in their entirety.

“Custodial sentences serve, in large measure, to criminalise young people, particularly young men who have been caught with small quantities of marijuana – an offence which is a mere error in judgment and not representative of criminal behaviour,” the AFC said.

AFC Member of Parliament, Michael Carrington, since 2015 had tabled a bill in the National Assembly for debate but it has since been languishing on the order paper, being deferred time and time again. “The time to act is now. We must no longer sit idly by and allow our young men and women to be sentenced to several years of jail time alongside hardened criminals, murderers and rapists.

“We will not be found complicit in destroying the lives of our young people and wounding our society rather than acting to heal it,” the AFC said.
The party also announced that it will commence plans to host, in the near future, a national symposium on the issue at which all stakeholders and sectors of society will be invited to deliberate and exchange views.

Brown said that the PM highlighted his disapproval with the sentencing and both government officials promised to continue the discourse on the matter. Public reactions have been strong especially on social media where persons have lamented the continued incarceration of particularly young males for the possession of small quantities of marijuana.

Many persons commented that the government should intervene and address the laws that continue to place persons in the lockups for small amounts of marijuana.
It was only recently that the legal affairs minister said that the discussion to review marijuana-related laws should be one in the public domain with their full involvement. Some commentators noted therefore that it is time those persons in jail for small portions of marijuana be pardoned and no longer be “incarcerated for grams of grass.”

In Guyana more than five grams of cannabis can land a person in jail for three years, while in some international countries and the Caribbean the amount of cannabis legally allowed to a person may vary to much larger quantities.
In Jamaica the possession of as much as two ounces or 56 grams of marijuana was amended to a petty offence in 2015. Other Caribbean islands have also moved to decriminalise small quantities of the plant.

The local Rastafarian Council is a huge advocate for reforming marijuana-related laws as members of that group use the herb for religious and meditative purposes. In March the group walked 11 miles calling on government to “free up the weed” while threatening to withhold their votes if their concerns were not addressed by the sitting administration.

They had also claimed that the incarceration of young men for marijuana was one way the prisons were being filled. Following the destruction of the Camp Street jail by fire, magistrates were openly told to relax the forwarding of defendants to the lockups for small quantities of marijuana as a measure of keeping inmate numbers down.

The public questioned the fate of Mangal’s children before proclaiming the negative impact such a harsh sentence will have on him and his family. PM Nagamootoo said it is not a case where the magistrate is to be blamed given what is stated in the law.
He said, however, “I am committed to modifying the applicable laws.”