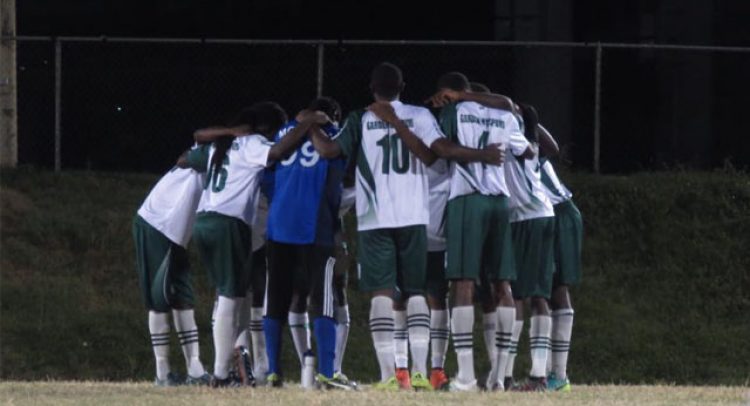 Tishan Hanley celebrated his return to his boyhood club Hobson Enterprises Garden Hotspurs by scoring the first goal in a 2-1 victory over St. Peters F.C. on Sunday night in the SKNFA Premier League.

Hanley, one of the three Hanley brothers who play competitive football in St. Kitts and Nevis and abroad, returned from a professional football stint abroad was in the starting line-up for Spurs with his brother Tiran Hanley, who transferred from West Basseterre rivals- Rams Village Superstars.

Hanley scored in the 21st minute after pouncing on a loose ball in the danger area to slot it home beyond the St. Peters goalkeeper.

Dahjal Kelly added to the score line in the 65th minute; four minutes after St. Peters goalkeeper Devaughni Nisbett, who transferred from demoted Security Forces F.C., was sent off with a straight red card for denying a clear goal scoring opportunity.

Playing with ten men St. Peters fought back and scored a consolation goal in the 73rd minute from the boot of Kareem Simmonds who broke away at the end of a through pass to notch it pass the Spurs goalkeeper.

St. Peters however was unable to get the equalizing goal.

Yohannes Mitcham scored that goal in the 34th minute of play.

The SKNFA Premier League continues on Wednesday at the Warner Park without spectators.

Those matches will be broadcast live on the SKNFA website at www.sknfa.com/live-football.

Vaccination roll out has started in St. Kitts & Nevis

Fed’s Powell: US economic recovery is uneven and incomplete