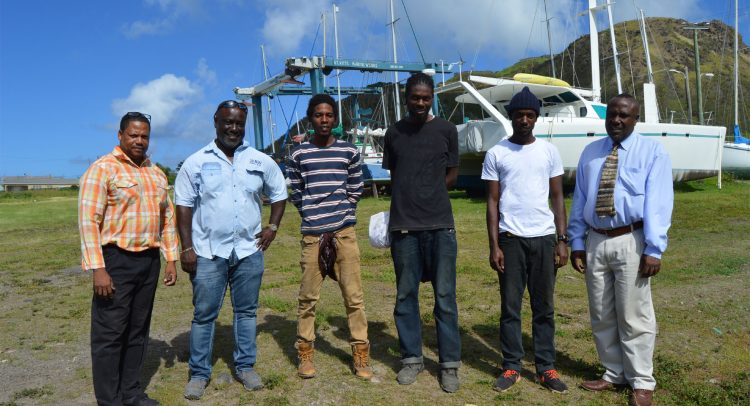 Training country’s youth: STEP is focusing on demands of the labour market 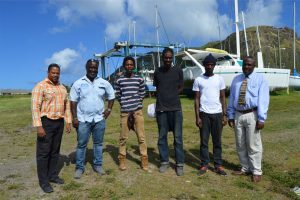 Basseterre, St. Kitts*, *February 9, 2018 (S.T.E.P.)* — The Skills Training Empowerment Programme (STEP), which was launched in February last year coming out of the now defunct People Employment Programme (PEP), has been focusing on demands of the labour market as it endeavours to empower the country’s youths while it offers them job skills through quality and approved training.

“It is important to know that since the change from PEP to STEP one year ago, the STEP now is more or less focusing on skills training,” said Mr William Phillip, Coordinator of Programmes at the Skills Training Empowerment Programme. “What we are actually focusing on is the demand of the labour market, what type of skill, what type of labour force the market really requires.”

Mr Phillip made the remarks on Wednesday February 7 at the St. Kitts Marine Works Limited’s boatyard in New Guinea where he had visited, accompanied by STEP’s Senior Field Officer Mr Jason McKoy, to witness the transition of three STEP trainees, who had been attached to the marine company, to being full-time employees of the company.

Four STEP trainees were attached to the St. Kitts Marine Works Limited in September of last year, and while one left towards the end of the year for greener pastures, three of them, namely Mr Junior Murray, Mr Aquan Julius, and Mr Jovan Powell remained behind to gain the hands-on, on-the-job training which they performed honourably and creditably to the level that the company opted to take them on as full-time employees.

Senior STEP Field Officer Mr Jason McKoy was at the boatyard carrying with him the final time/work sheets issued by the Skills Training Empowerment Programme office to facilitate the trainees’ payment, as they had graduated from the STEP payroll to the payroll of their new employer, the St. Kitts Marine Works Limited.

“I had spoken to Mr (Wendell) Wattley (Director of STEP) and he said that at STEP they were in the business of identifying young people requiring skills training and he wanted to give me some of his potential people who are from this area,” said Mr Regiwell Francis, owner of the St. Kitts Marine Works Limited.

“After discussions I agreed to give them a try. Out of the four people sent we have three who stayed with us. They showed a lot of ambition and willingness to work and learn. We exposed them to many different areas of the marine sector down here at the boatyard and they gravitated very well  and they picked up on the skills quickly, some individuals ended using heavy equipment like the backhoe and all that. They learned about the boat placing, sanding, painting and all that stuff.”

A proud entrepreneur and employer whose marine company has been in business since 2000 and has 45 persons in the employment of his larger group of companies, Mr Francis commented: “We saw the potential in them having picked up the skills, and out of fairness we decided to take them on full-time. We have started paying them directly, and released them from the STEP to make those funds from STEP available to another set of trainees.”

20-year old Mr Junior Murray did not have a permanent job after he left the Verchilds High School at fourth form. A self-driven and hardworking individual, he tried self-employment where he did landscaping, but without training he could not move far.

“I joined STEP last year in September and with three others they asked us what we want to do and we chose the boatyard because we want to see how the lift and other machinery here work and how they operate,” said Mr Murray. “STEP gave me a start in life, and made things happen for me – I really appreciate it.”

After leaving the Verchilds High School in 2016 with four subjects, Mr Aquan Julius, 19, tried his hands at doing steelwork and air conditioning. He however decided to join STEP which he believed, and rightly so, would expose him to skills and trades training. He is one of the four that were seconded to the St. Kitts Marine Works Limited for practical training.

“I am happy here (St. Kitts Marine Works Ltd) as I am doing many things like mechanics, working the lift, and operating the backhoe,” said Mr Julius. “I would say STEP is a good programme, and that it is doing a good thing. I would advise any youngster who just leave school and are looking for a job to join the STEP, because it will give them opportunities to advance in life.”

Mr Jovan Powell, 19, was not as lucky as his two other colleagues. After leaving the Verchilds High School at fifth form in 2016, he did not have any job until he joined STEP in September last year, where after he was interviewed was seconded to the St. Kitts Marine Works Limited.

“Within a short time at St. Kitts Marine Works, we have been given a job because I believe we did a good job, and I very much appreciate what they are doing for us,” said Mr Powell. “I see a good future for myself here. I do landscaping, and operating machinery.”