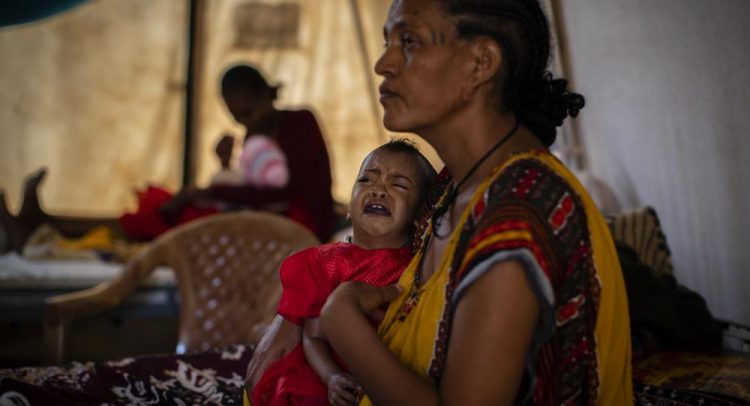 NAIROBI, Kenya (AP) — The plea arrived from a remote area that had so far produced only rumors and residents fleeing for their lives. Help us, the letter said, stamped and signed by a local official. At least 125 people have already starved to death.

Trapped in one of the most inaccessible areas of Ethiopia’s conflict-torn Tigray region, beyond the reach of aid, people “are falling like leaves,” the official said.

The letter dated June 16, obtained by The Associated Press and confirmed by a Tigray regional health official, is a rare insight into the most urgent unknown of the war between Ethiopian forces backed by Eritrea and Tigray’s former leaders: What’s the fate of hundreds of thousands of people cut off from the world for months?

As the United States warns that up to 900,000 people in Tigray face famine conditions in the world’s worst hunger crisis in a decade, little is known about vast areas of Tigray that have been under the control of combatants from all sides since November. With blocked roads and ongoing fighting, humanitarian groups have been left without access.

A possible opening emerged this week when Ethiopia’s government announced an immediate, unilateral cease-fire after Tigray fighters re-entered the regional capital and government soldiers fled. An official for the United States Agency for International Development told U.S. lawmakers on Tuesday that some aid groups were expected to test the cease-fire immediately in an effort to reach remote areas.

However, it isn’t clear whether other parties in the conflict, including troops from neighboring Eritrea accused of some of the war’s worst atrocities, will respect the cease-fire. A Tigray spokesman rejected it as a “sick joke” and vowed to fully liberate the region.

The letter that reached the regional capital, Mekele, this month from the cut-off central district of Mai Kinetal was just the second plea of its kind, the health official who confirmed it said. The first had been a message from Ofla district reporting 150 deaths from starvation, which the United Nations humanitarian chief shared in a closed-door session of the U.N. Security Council in April, bringing an angry response from Ethiopia’s government.

But the letter from Mai Kinetal is different, the health official said, offering badly needed, well-compiled data that lay out the devastation line by line: At least 440 people have died, and at least 558 have been victims of sexual violence. More than 5,000 homes have been looted. Thousands of livestock have been taken. Tons of crops have been burned.

“There is no access to clean water; electricity, phone communication, banking, health care, and access to humanitarian aid are blocked,” district leader Berhe Desta Gebremariam wrote. “People are unable to move around to save their lives because Eritrean troops completely put us under siege with no transportation, and people are condemned to suffer and die.”

Looted farmers in the largely agricultural district have been left without the seeds to grow food, Berhe wrote, warning that without aid 2021 and 2022 will be catastrophic. The one aid delivery to Mai Kinetal that wasn’t blocked was based on a badly outdated 1995 census, meaning half the district’s residents were left out. The aid was later looted by Eritrean troops.

Residents had been coming by foot from Mai Kinetal with word that people were starving, the Tigray regional health official said, speaking on condition of anonymity for fear of retaliation. But the letter confirms the details and extent of the crisis.

Other unreachable districts remain silent, he said, as phone services are cut in much of Tigray.

Asked about Mai Kinetal, a senior U.N. humanitarian official called it “an especially critical area for us to reach” and confirmed to the AP that aid had not made it into the district, and a number of others, since the conflict began.

Overall, the U.N. estimates that 1.6 million people remain in Tigray’s hard-to-reach areas, and the U.N. children’s agency last week warned that at least 33,000 severely malnourished children in hard-to-reach areas face the “imminent risk of death” without more aid. But humanitarian workers warn that the situation is especially fluid now amid some of the fiercest fighting yet.

Even the unilateral cease-fire announced this week is designed not to last. Ethiopia’s government says it will end once the farming season in Tigray is over, which means September. How needed seeds and other supplies will reach farmers across the region in time is not clear.

For Tigrayans with loved ones trapped inside inaccessible areas, the lack of information has meant months of fear and despair.

“Every time I get to talk to someone who managed to flee from the area, it’s like a round of pain and shock again and again,” said Teklehaymanot G. Weldemichel, a diaspora Tigrayan from Mai Kinetal. He said his family home there had been shelled at the beginning of the war, and his parents later returned to find every item in the house taken by Eritrean soldiers, even photo albums and frames.

One resident who fled to Sudan, Kibreab Fisseha, told the AP that a cousin with diabetes who stayed in Mai Kinetal had died because of lack of food. “Both my parents are still there,” Kibreab said. “They are hiding in the house and I hope they are fine until help comes.”

Another Mai Kinetal resident told the AP he has been able to speak with his mother just once since the war began, in a short conversation about a month ago before phone service disappeared again.

“I have been calling ever since the war started,” he said, giving only his first name, Tsige, to protect his family. He said his mother described fierce fighting as Eritreans took control of their village and many people fled.

Tsige’s father, in his 70s, was among those too old to leave. Eritrean soldiers one day came to the house and asked him to bring them water. He did, and the soldiers later spared him. But other residents who were found during house-to-house searches and suspected of links to the Tigray fighters were killed, Tsige said. Homes abandoned by fleeing families were burned.

When another relative refused to hand over his cattle to Eritrean soldiers, they slaughtered him in front of his grandson, Tsige said. In all, he knows at least 11 people in Mai Kinetal who have been killed, including a deaf man in his 70s.

“Every day could change the lives of my family,” said Tsige, who is studying in Japan and feels helplessly far away. “I have to prepare for the worst. Every few minutes you think about your family, are they alive?”

Tsige is too young to know the famine that ravaged Ethiopia, especially the Tigray region, amid conflict in the 1980s and shocked the world, but he grew up hearing about it from his family. He pleaded for the international community to act and for Ethiopian Prime Minister Abiy Ahmed to “be a human person” and end the war.

“It’s happening now again, and we’re just watching it happen,” Tsige said. “I don’t want to see a documentary filmed after my family has died. I want action now.”

In this Tuesday, May 11, 2021 photo, Roman Kidanemariam, 35, holds her malnourished daughter, Merkab Ataklti, 22 months old, in the treatment tent of a medical clinic in the town of Abi Adi, in the Tigray region of northern Ethiopia. As the United States warns that up to 900,000 people in Tigray face famine conditions in the world’s worst hunger crisis in a decade, little is known about vast areas of Tigray that have been under the control of combatants from all sides since November 2020. With blocked roads and ongoing fighting, humanitarian groups have been left without access. (AP Photo/Ben Curtis)

Messi’s future up in the air as Barcelona contract ends