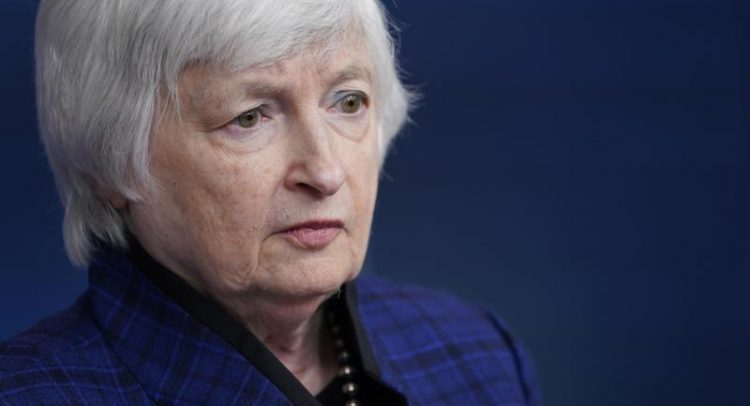 WASHINGTON (AP) — The Treasury Department announced Wednesday it will raise $126 billion to finance the government in a series of auctions next week by employing emergency measures to keep from broaching the newly imposed debt limit.

The Treasury announcement, part of Treasury’s quarterly refunding operations, will see the $126 billion raised by auctioning 3 and 10-year notes and a 30-year bond with the auctions occurring on Tuesday through Wednesday of next week.

Those auctions will raise money to meet debt-servicing requirements on $58.6 billion in Treasury notes and bonds that are coming due plus raising approximately $67.4 billion in new cash to keep the government operating.

The government’s debt ceiling which had been suspended for two years, went back into effect on Aug. 1 at $28.4 trillion, the level the debt had risen to since the limit was suspended. That period has seen the annual federal deficit hit a record $3.4 trillion last year as the government approved trillions of dollars of support to an economy hit by a global pandemic.

The emergency measures Treasury is employment involve book-keeping maneuvers to disinvest various government employee pensions funds to free up more borrowing room while remaining under the debt limit. Once the deadlock over approving a higher debt limit is resolved the funds are returned along with all the interest lost to the various accounts.

Treasury Secretary Janet Yellen has called on Congress to quickly lift or suspend the borrowing limit to avoid the threat of the government defaulting on its debt, something Yellen has said would be “catastrophic.”

Treasury officials said Wednesday they still did not have an estimate of when the government will run out of maneuvering room to use what it calls “extraordinary measures” to avoid a default, saying the unusual financing issues raised by the pandemic have made forecasting difficult.

“The period of time that extraordinary measures may last is subject to considerable uncertainty due to a variety of factors … exacerbated by the heightened uncertainty in payments and receipts related to the economic impact of the pandemic,” Brian Smith, Treasury deputy assistant secretary for federal finance, said in a statement.

The Congressional Budget Office estimated in July that Treasury could exhaust its maneuvering room in either October or November. The need to deal with the debt limit is likely to become embroiled in the fight between Democrats and Republicans over passage of pending infrastructure bills.

Senate Minority Leader Mitch McConnell, R-Ky., said on July 21 that he doubted that any Republican would vote to increase the debt limit.

FILE – In this May 7, 2021, file photo Treasury Secretary Janet Yellen speaks during a news briefing at the White House in Washington. The Treasury Department announced Wednesday, Aug. 4, it will raise $126 billion to finance the government in a series of auctions next week by employing emergency measures to keep from broaching the newly imposed debt limit. (AP Photo/Patrick Semansky, File)