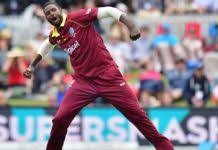 Favourites West Indies are bracing for a spin assault from hosts Zimbabwe in today’s all important Super Sixes clash of the ICC World Cup Qualifiers.

Much will be riding on the contest at Harare Sports Club as the winners will take a giant step towards the fnal and clinching one of the two remaining spots at next year’s World Cup in England.

With spin having played a key role in Zimbabwe’s unbeaten run in the tournament, veteran seamer Kemar Roach said yesterday the Windies were already aware of what to expect.

“Spin will definitely be a factor in the match. The wickets are under wear and tear now, so it’s going to be tough for us to put a big score on the board,” Roach explained.

“But runs on the board is the name of the game and obviously, as a bowling attack, we have to put pressure on the Zimbabwe batsmen and we’ll be fine.”

In conditions which will favour the hosts, the Windies will have to deal with the likes of left-arm spinners Tendai Chisoro and Sean Williams, leg-spinner Graeme Cremer, and off-spinner Sikander Raza.

The match took on even more significance after West Indies were upset by Afghanistan in their opening match of the Super Sixes last Thursday at Harare Sports Club.

Though the defeat was their first of the tournament after finishing the preliminary round unbeaten, it saw West Indies slip down the table to third and out of the qualifying positions.

Zimbabwe lead the standings with five points, ahead of Scotland only on net run rate, with the Windies on four.

Roach, who missed the Afghanistan defeat through injury but will return to face Zimbabwe, said the squad understood the importance of the encounter and were up for it.

“It’s a big match for us, obviously, and I’m looking forward to it. I missed that last one due to injury, but I’m feeling much better now. I put the work in at practice and I’m ready and raring to go,” he said.

“The guys are obviously very focussed. This is like the biggest career match for most of these guys, so to win this match and win the other one [against Scotland] and go to the World Cup is obviously the pinnacle.”

West Indies are bidding to continue their proud tradition of having contested every World Cup, since winning the first two back in 1975 and 1979 under the legendary Clive Lloyd.

The qualifiying campaign has been their first, however, after finishing ninth in the ICC world rankings and outside the automatic qualifying spots.