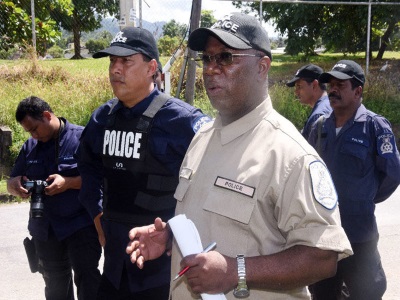 Newly appointed Police Commissioner Gary Griffith has warned criminals that “no street, no community, nowhere in this country is going to be controlled” by them as the police promise to ‘swing back hard’ in dealing with the crime situation in Trinidad and Tobago.

“Any community leader, gang leader, any organisation that has criminal intentions and think they can control any area, we as the Police Service will strike back. If they swing, we will swing back. There is no situation where we will look at a community leader and rub shoulders or feel sympathy for them,” Griffith told reporters after the police ended a two-day “Operation Crime Back” crime fighting exercise on Sunday

“No street, no community, nowhere in this country is going to be controlled by criminals. The Police Service will take control of those communities and ensure that the fundamental rights of citizens are adhered to. That is safety, so anytime criminals think they are in control, we will swing back hard,” he warned.

Griffith, a former national security minister, said over 100 police officers took part in the intelligence-gathering phase of the exercise that resulted in the arrest of at least 24 people.

Griffith said the new “intelligence-driven” anti-crime initiative is intended to do three things, namely ensuring a greater police presence, take away the public’s fear of crime and to “swing” back at criminals.

Among those arrested were three suspects wanted in connection with last week’s triple murder in Bon Air Gardens, along the east-west corridor.

The police said they had also seized a quantity of arms and ammunition and destroyed 2000 fully-grown marijuana trees and 4000 seedlings.

Critics 'chuck rocks from both sides' at May's Brexit plans