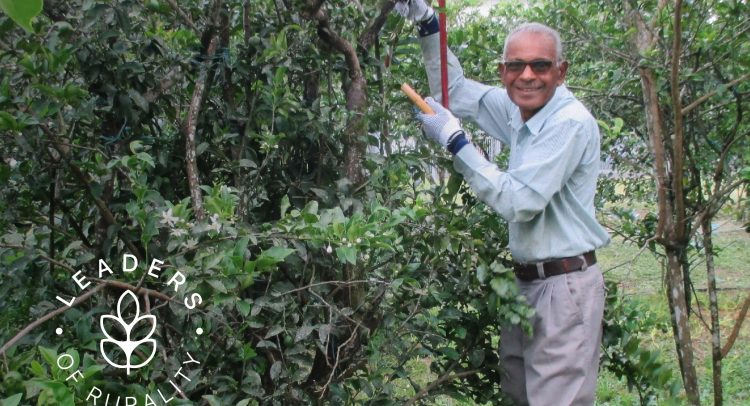 San Jose, 14 June 2021 (IICA) – Ramgopaul Roop, a prominent farmer and advocate for resilient agriculture in the Caribbean, with a focus on efficient water use and soil health, will receive the “Soul of Rurality” award bestowed by the Inter-American Institute for Cooperation on Agriculture (IICA) on Leaders of Rurality in the Americas.

The award is an initiative of the specialist agency in agricultural and rural development to recognize men and women who are leaving their mark and making a difference in rural Latin America and the Caribbean.

In addition to receiving the “Soul of Rurality” award, IICA’s Leaders of Rurality awardees will be invited to participate in various advisory bodies of the organization.

IICA Director General, Manuel Otero, remarked that, “The award pays tribute to those who are playing a unique dual role: guaranteeing food and nutritional security, by producing under all circumstances, as well as protecting the biodiversity of the planet. It will also emphasize their capacity to be positive role models in rural areas of the region”.

Under the initiative, IICA will strive to ensure that the recognition facilitates the establishment of linkages with state, civil society and private sector organizations to gain support for the awardees’ causes.

In launching the initiative, the Director General, reflected that, “These are people whose influence can be seen in all the food that we eat—wherever it ends up—and in each plot of agricultural land and in the communities where farmers and their families live. These men and women are leaving their mark and are the soul of rurality, because they produce, plant, harvest, create, innovate and unite”.

“They embody silent leadership, he remarked, “which is something we should highlight and recognize. Above all, they are role models because they transform, overcome adversity and inspire”.

IICA is working with its 34 Delegations in the Americas to select the first #Leadersofrurality.

The results of the first phase of the initiative will be presented to the Executive Committee of IICA, one of the Institute’s governing bodies.

Ramgopaul Roop: Building a resilient and productive agriculture sector to feed the Caribbean

In 2019, the story of Ramgopaul Roop spread to many corners of the world, when his example of perseverance and thirst for learning was circulated by several print media and social media platforms. He quickly became a source of inspiration for people from all walks of life with a desire for progress and self-improvement.

It began when news got out that—at the age of 71—this curious and determined Trinidad and Tobago farmer and entrepreneur, had obtained his Master of Science in Business with Distinction, specializing in Human Resources, from Edinburgh Napier University in Scotland.

Roop studied for the degree long-distance from his farm in Trinidad, then travelled to the United Kingdom for his graduation ceremony. A mere ten years before, he did not even know how to use a computer.

“I had to reorganize my life to study online. As a farmer, it wasn’t easy to work all day in the heat of the tropical sun and then study for long hours at night, sometimes until dawn”, said Roop, who is a diabetic, who must constantly monitor his blood sugar levels to ensure that they remain stable.

He confessed that, “Of course, there were many times, when working in high temperatures, I was on the verge of collapsing in the fields from hypoglycemia, but I never thought of abandoning my studies. I knew this was the last train and I was determined to catch it. The process was quite challenging but also very stimulating. I am convinced that there are no age limits for academic achievement or for professional development”.

In fact, Roop’s history of perseverance began many years before. Born in 1947, he is the descendant of Indians who migrated to Trinidad and Tobago in the 19th century, under Imperial Britain’s infamous system to obtain cheap labor for its plantations in the colonies. Roop’s parents were peasant farmers who could not read or write.

In 1971, he earned his Diploma in Agriculture from the Eastern Caribbean Institute of Agriculture and Forestry and established his family farm in 1990, which he now operates with his wife Beena Roop, and his son Sunil. However, he never gave up his desire to continue learning.

He explained that “After seeing my three sons graduate from university—two in Medicine and one in Engineering—I was eager to acquire higher academic qualifications, by pursuing an MBA”.

His entire family was supportive of his adventure, particularly his wife, Beena, who read and re-read the drafts of many of the papers that Roop submitted to the Scottish university. “I know that my parents, Poyah and Roop Bataw, are proudly looking on from heaven”, he remarked, with emotion in his voice.

The family farm is situated in Carlsen Field, an agricultural region in Central Trinidad, which is close to the IICA Trinidad and Tobago office in Brechin Castle Couva – approximately 30 kilometers from the capital, Port of Spain.

On the 1.5-hectare farm, Rocrops, Roop gained first-hand knowledge about the real vulnerability of farming in the Caribbean’s small islands, but instead of giving in, he worked tireless to implement resilient agriculture.

“Extreme events made more severe by climate change endanger the livelihoods of vulnerable groups”, he said, “among them, family farmers who depend on seasonal rains and on land that is often marginal to produce food”.

He pointed out that, “These events limit production and the profitability of small farmers, particularly those who are cultivating in problematic soils”.

With research and patience, Roop has learned to adapt to climate change, becoming an expert in soil care and natural resource management. Thanks to innovation and his continuous quest for solutions, he has become the gold standard for farming in this small island, which depends on imports to guarantee the country’s food security.

Roop is convinced that, despite high exposure to extreme climate events, small farms in the Caribbean can become sustainable production units that are passed on from generation to generation. His case is one such example.

In developing his farm, he has sought to apply a holistic approach that includes environmental preservation, effective water management and the incorporation of technologies that can strengthen resilience against climate variations and boost crop yields.

Roop pointed out that, “In Trinidad and Tobago, agriculture accounts for only 0.5% of the value of total output but employs more than 4% of the population. Thus, it is essential in rural areas, economically and socially speaking.  The farming community is aging and must be replenished by young people. Therefore, young people must be able to see that there is path to achieving sustainable agriculture in the Caribbean”.

On his farm, Roop has also incorporated agroecological soil rehabilitation practices that are environmentally friendly. His main achievement has been to promote sustainable agricultural techniques and business practices with the potential to contribute to rural development and food security in Trinidad and Tobago.

The primary goal of Rocrops Agrotec is to employ good agricultural soil and water management practices, through management and planning around seasons of drought, flooding and erosion. Rocrops has also become a focal point for visits by students pursuing agricultural studies.

The family home has become a site for training and instruction for university students pursuing agricultural studies, as well as for members of nearby communities.

Many Iranians fear vote will underscore their powerlessness