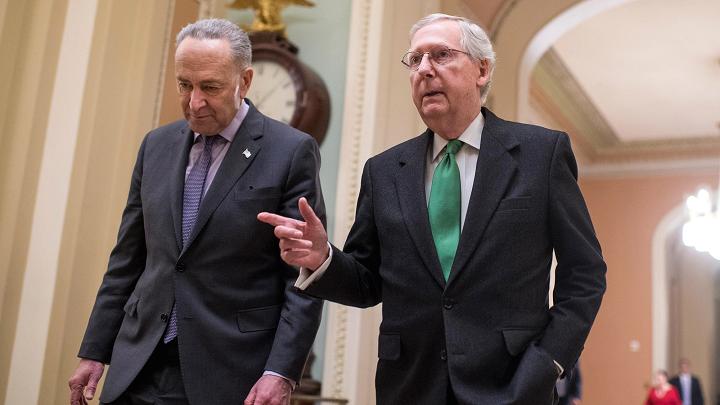 The Trump administration offered venomous criticism of a bipartisan immigration plan Thursday, as senators struggled to reach a consensus on a bill to protect young immigrants from deportation and boost border security.

The White House and Department of Homeland Security eviscerated the proposal put forth by 16 bipartisan senators, threatening a veto from President Donald Trump if it passes Congress. Trump has put his weight behind a separate GOP bill before the Senate, which mirrors the president’s immigration demands. Republican leaders argue the president’s framework has a better chance of passing the House.

The contentious back-and-forth came as the Senate showed little progress toward its goal of passing an immigration bill this week and protecting up to 1.8 million immigrants brought to the U.S. illegally as children. While the bipartisan plan may have a better chance of passing the Senate than the Republican proposal, its critics said it had no chance of clearing the House or getting Trump’s signature.

The Senate was voting on the competing proposals on Thursday afternoon, deciding whether to advance four amendments. The chamber blocked a narrow immigration plan by Sens. John McCain, R-Ariz., and Chris Coons, D-Del, and a proposal by Sen. Pat Toomey, R-Ohio, to withhold funding from so-called sanctuary cities.

The bipartisan bill, originally sponsored by Sens. Mike Rounds, R-S.D., and Angus King, I-Maine, would also offer a pathway to citizenship for immigrants protected by the Obama-era Deferred Action for Childhood Arrivals and those who were eligible but did not apply. It would limit family-based visas, fund Trump’s proposed border wall or other border security and instruct Immigration and Customs Enforcement to turn their focus away from immigrants without criminal records.

Trump weighed in on Twitter on Thursday afternoon, calling the plan a “total catastrophe.” He contended that backing it would be a vote AGAINST law enforcement, and a vote FOR open borders.” He urged Democrats to support the Grassley bill.

In addition to veto threat, the White House is asking the bill’s sponsors to withdraw their support for it, calling the measure “grievously misinformed” and “catastrophically bad.” Administration officials, who declined several requests from reporters to speak on the record, did not indicate to reporters which lawmakers the White House was pressuring or whether any senators planned to reverse their decision.

“We’re just hoping that some of the people who sponsored it were completely unaware of what was in it,” one official said. “Maybe it can be chalked up to a long series of drafting errors compounded on top of one another.”

One lawmaker called out by name was Sen. Lindsay Graham, whom the officials repeatedly called an “obstacle” to immigration reform.

The public should question “whether Lindsey Graham’s presence on those bills is the problem,” one person said. “If he wants to be part of the solution, he should work with not against the rank-and-file professionals at the Department of Homeland Security.”

Graham has repeatedly criticized White House officials, particularly policy aide Stephen Miller, for the difficulty of reaching an immigration deal with Trump. The president has rejected multiple immigration proposals put before him.

At one point last month, Trump told bipartisan lawmakers he would sign whatever they passed and take the political heat for it. He then retrenched and insisted on Congress passing the policies he desired.

Trump, who ended DACA with an original phase out date of March 5, has said he wants to protect the young immigrants and treat them with “heart.” The program will likely last longer than that deadline because of pending lawsuits.

In a remarkable statement Thursday, the DHS argued the Rounds-King bill “would be the end of immigration enforcement in America and only serve to draw millions more illegal aliens with no way to remove them.” The department called it “an egregious violation” of Trump’s demands and invoked the Sept. 11, 2001 terror attacks in claiming it “increases the risk of crime and terrorism.”

In his own statement, Graham said DHS was “acting more like a political organization intent on poisoning the well.” The agency seems intent on all of the immigration proposals failing, he said.

“Statements like this undermine confidence in DHS and make one question whether they can rationally engage with the Congress on this issue,” the South Carolina Republican said. “They lost credibility with this release and that’s not good for those of us concerned about protecting our border and making sure DHS has the tools they need to best protect our nation.”

The Trump administration doubled-down on its full-throated support for Grassley’s broader bill, calling it a “very balanced approach.”

“We think that has a chance of getting 60 once folks realize that these other proposals are totally and completely unserious,” an official said.

The Senate is set to vote on four amendments to a blank vehicle for immigration legislation.