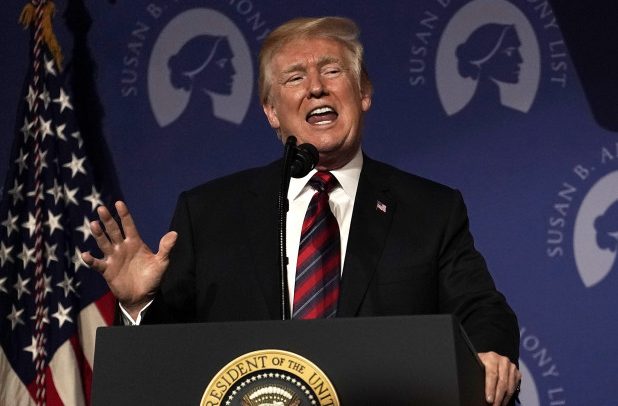 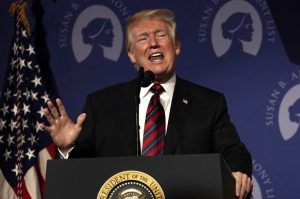 President Trump dubbed his unsubstantiated claim that a shadowy FBI informant was embedded in his 2016 campaign “SPYGATE.”

“Look how things have turned around on the Criminal Deep State. They go after Phony Collusion with Russia, a made up Scam, and end up getting caught in a major SPY scandal the likes of which this country may never have seen before!,” he wrote on Twitter.

“What goes around, comes around!,” he said, adding: “SPYGATE could be one of the biggest political scandals in history!”

The president in his tweets continued pressing his claims that the FBI embedded an informant in his campaign during the Obama administration for political purposes — an allegation which he said Tuesday would “be a disgrace to the country” if it turned out to be true.
James Clapper, who was the director of national intelligence from 2010 to 2017, said the informant who wasn’t working for the campaign was trying to find out what the Russians were up to.

Asked by host Joy Behar if Trump should be happy that the FBI was looking out for Russian involvement in the election, Clapper said, “He should be.”

Trump reacted to Clapper’s comments in a tweet on Wednesday, saying: “No, James Clapper, I am not happy.”

Some Republicans in the House are calling for another special counsel to be named to investigate special counsel Robert Mueller’s Russia probe and for the informant to be identified.

Halper, 73, is a veteran of past Republican presidential administrations going back to President Richard Nixon and has had contracts with the Defense Department since 2012, the Washington Post reported on Tuesday.

The newspaper said Halper in the summer of 2016 reached out to three Trump campaign advisers for discussions about foreign policy.

Later that year, he began working for a secret informant for the FBI, which was probing Russian tampering in the campaign.

The Department of Justice said it would expand the probe already under way by the agency’s inspector general to examine the FBI’s involvement in the Trump campaign.

A number of GOP lawmakers and US intelligence officials will meet Thursday to review classified information about the source.

While the president and his allies in the Republican Party claim that the Obama administration’s FBI tried to sway the election in favor of Hillary Clinton, Trump did win the White House.

In March 2017, then-FBI Director James Comey first publicly announced the agency was investigating Russia’s involvement in the 2016 election and any connection to Trump campaign associates.

The FBI at the same time was carrying out a very public investigation of Clinton’s emails, leading Comey to announce just 11 days before election day that they were reopening the probe after emails were found on the laptop of Anthony Weiner, the now-estranged husband of longtime Clinton aide Huma Abedin.