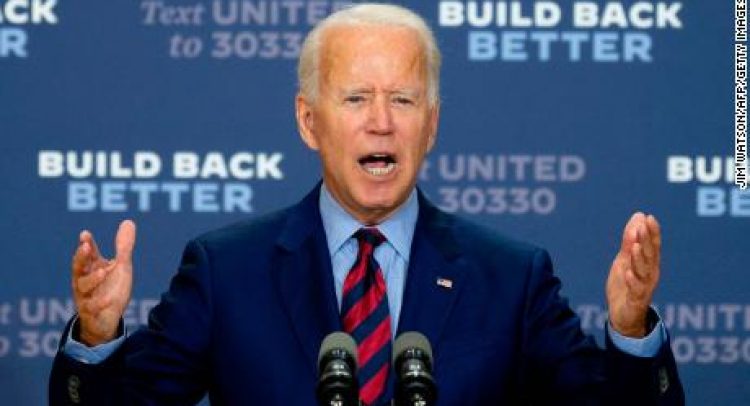 London (CNN Business)- Optimism about the end of the pandemic and support from governments and central banks have rescued the Trump stock market. Now, investors will see if those gains can hold under Joe Biden, who will be sworn in as the 46th president of the United States on Wednesday.

A look back: Shares shot up after Trump’s 2017 tax cuts supercharged corporate earnings, then plunged at record speed when Covid-19 began battering the United States. Since then, however, they’ve been rocketing higher, repeatedly reaching all-time highs. Deep political polarization and a worsening pandemic have not been enough to hold Wall Street back.

Despite this sharp rally, stocks under President Donald Trump have not performed as well as they did during the first terms of Presidents Bill Clinton or Barack Obama, according to an analysis by my CNN Business colleagues Matt Egan, Annalyn Kurtz and Tal Yellin.

And some of the recent increases can be attributed to Biden’s win, which investors believe will generate substantial government spending to boost the economy. Stocks have gained about 13% since Election Day as of Tuesday — the best post-election market performance for a new president in modern history, according to CFRA Research.

Biden has not put as much emphasis as Trump on stocks as a gauge of the country’s strength or wellbeing.

“The idea that the stock market is booming is his only measure of what’s happening,” Biden said of Trump in the final presidential debate in October. “Where I come from in Scranton and Claymont, the people don’t live off of the stock market.” (Per the latest Gallup poll, 55% of Americans have some exposure to the stock market, many through retirement accounts.)

Even so, Wall Street will be watching to see if market momentum can be maintained. Chatter has increased in recent weeks that corporate valuations, particularly in the tech sector, have jumped too high.

“Many investors worry that the equity market has rebounded too far and too fast and that there are signs of excess starting to emerge in parts of the financial system,” Peter Oppenheimer, Goldman Sachs’ chief global equity strategist, told clients this week. “This is a reasonable concern given that the rebound in equities since the bear market trough in March of last year has been remarkable.”

Oppenheimer said that while a correction — or a 10% decline in stocks from their recent peak — looks “increasingly likely,” the odds that stocks will enter a new bear market, dropping 20% from recent highs, in the next year appear “fairly low.”

He points to expectations of strong global economic growth in 2021 as the pandemic eases, as well as “unprecedented” policy support.

On that front, however, unknowns remain. While Federal Reserve Chair Jerome Powell has emphasized that interest rates could remain at historic lows for the foreseeable future, the fate of Biden’s $1.9 trillion stimulus package will rely on his ability to generate some Republican support. In a divided Washington, that will be no easy task.

With the Americas failing to control coronavirus, many hospitals are at or close to capacity, PAHO director says