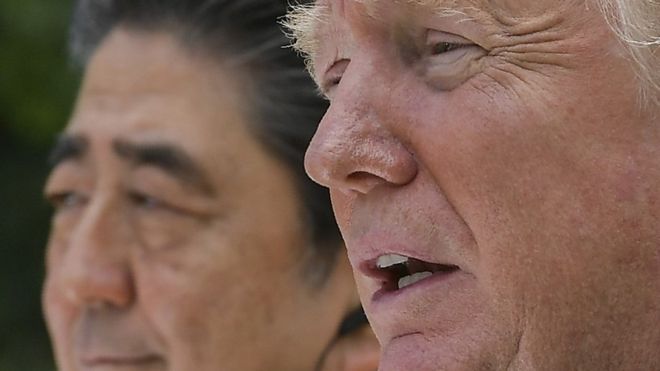 Trump-Kim summit: North Korea leader may get US invite 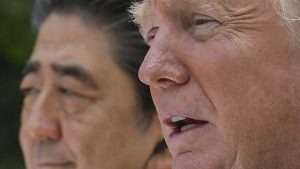 US President Donald Trump said he would consider inviting North Korea’s Kim Jong-un to the White House if their summit in Singapore goes well.

Mr Trump made the comment after meeting Japan’s PM Shinzo Abe to discuss the 12 June summit.

He said it was possible an agreement to end the Korean War could be reached, though he called that “the easy part” of the negotiations.

“It’s what happens after that that is really important,” he told reporters.

The US and its regional allies want to see North Korea give up its nuclear weapons but Mr Trump acknowledged that it “will take longer” than one meeting to realise that goal.

What did Mr Trump say about the summit?

Mr Trump said he did not want to use the term “maximum pressure” in reference to North Korea “because we’re going into a friendly negotiation”.

But he said he had many sanctions he could use against North Korea, but didn’t intend to “because I really think there’s a potential to make a deal”.

When asked about a report a day ago that Mr Trump might invite Mr Kim to his Florida retreat Mar-a-Lago if next Tuesday’s summit goes well, he quipped: “Maybe we’ll start with the White House, what do you think?”

What does Mr Abe want from the summit?

The Japanese PM has held regular meetings with Mr Trump since the US president took office, but he has been eager to ensure Japan’s interests are not overlooked in any rapprochement between the US and North Korea.

Mr Abe said he was confident Mr Trump understood Japan’s concerns about its citizens who were abducted by North Korea in the 1970s and 1980s to help train its spies in Japanese language and customs.

Although North Korea has admitted to 13 kidnappings, the real figure is thought to be higher than that.

Mr Abe said he wanted to “directly face North Korea and talk with them so that the abduction problem can be resolved quickly”.