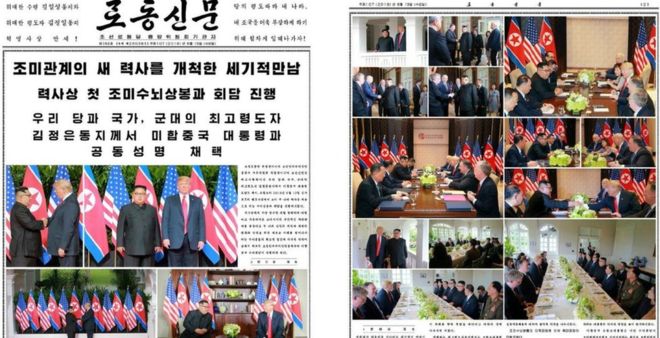 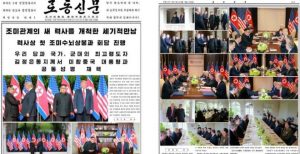 North Korea has celebrated the Trump-Kim summit as a great win for the country, with state media reporting that the US intends to lift sanctions.

The two leaders met on Tuesday, signing a brief declaration on denuclearisation and reducing tensions.

President Donald Trump said afterwards that sanctions would remain in place for now, but would be lifted once “nukes are no longer a factor”.

The move – long demanded by Pyongyang – has been seen as a major concession to North Korea and appeared to take US allies in the region by surprise.

In his latest tweets after arriving back in the United States, Mr Trump continued his upbeat tone.

“There is no longer a nuclear threat from North Korea,” he maintained. “President Obama said that North Korea was our biggest and most dangerous problem. No longer – sleep well tonight!”

‘Meeting of the century’

North Korea’s media are tightly controlled by the government and only ever report positively on officials’ activities. They rarely report on leader Kim Jong-un’s activities in real time.

But Tuesday’s summit in Singapore was front page news on Wednesday, with multiple images of Mr Kim alongside Mr Trump.

Official newspaper Rodong Sinmun called the summit “the meeting of the century” on its front page.

State media agency KCNA published an enthusiastic article in English praising the talks as a historic break from the past.