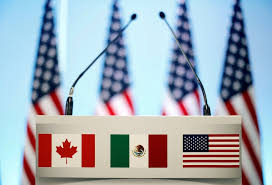 U.S. President Donald Trump may seek separate talks with Canada and Mexico in a bid to get individual trade deals with the two countries, White House economic adviser Larry Kudlow said on Tuesday.

“He is very seriously contemplating kind of a shift in the NAFTA negotiations. His preference now, and he asked me to convey this, is to actually negotiate with Mexico and Canada separately,” Kudlow said in an interview with Fox News.

“He may be moving quickly toward these bilateral discussions instead of as a whole.”

The United States, Canada and Mexico have been in months of negotiations to rework the North American Free Trade Agreement, which Trump has long criticized as having harmed the United States economically.

On Friday, Trump said he might prefer to end NAFTA in favor of separate bilateral agreements with the two U.S. neighbors.

Kudlow said the U.S. president was moving toward that scenario.

“He believes that bilaterals have always been better. He hates these multilaterals … he hates large treaties.”

Such a move toward separate talks would come at a tense time in U.S. trade relations with the two countries. The Trump administration said on Thursday it was moving ahead with tariffs on aluminum and steel imports from Canada, Mexico and the European Union, ending a two-month exemption and setting the stage for a possible trade war.

Canadian Prime Minister Justin Trudeau called the tariffs an affront to the longstanding security partnership between Canada and the United States, and Canada announced retaliatory steps.

In a television appearance on Sunday, Kudlow called the trade frictions a “family quarrel.”

President Nicolas Maduro rejects US interference via the OAS