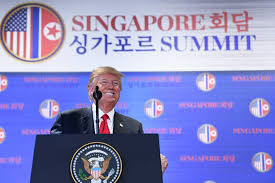 Trump says he will stop ‘war games’ with S Korea

The US will stop holding joint military exercises on the Korean peninsula, President Donald Trump said Tuesday, making a major concession to North Korea after his summit with Kim Jong Un.

Washington and Seoul are security allies, with 28,500 US troops stationed in the South to defend it from its neighbour which invaded in 1950.

They hold joint military exercises every year that infuriate Pyongyang, which has long demanded an end to the drills and often responds with actions of its own, ratcheting up tensions.

North Korea in May cancelled talks with Seoul over “Max Thunder” joint military air exercises between the US and the South. They were a “rude and wicked provocation”, it complained.
“We will be stopping the war games which will save us a tremendous amount of money,” Trump told reporters.

“Under the circumstances we are negotiating a complete deal,” he added. “It is inappropriate to have war games. Number one, we save money. A lot. Number two, it is really something they very much appreciated.”

Trump did not indicate whether the North would make any concessions in return for stopping the exercises.

The move, if fulfilled, would appear to be effectively an implementation of the “freeze for freeze” proposal promoted by China, under which the North would stop nuclear and missile tests in exchange for a halt to the exercises.

Kim has previously declared a moratorium on testing, saying the development of his nuclear arsenal is complete.

Trump also said he wanted to withdraw the US troops stationed in the South, something he promised on the campaign trail, saying: “I’d like to be able to bring them back home.”
The issue was “not part of the equation right now”, he said, but “at some point, I hope it will be.”

Trump’s declarations are likely to alarm conservatives in South Korea, who have appealed to him not to put its security at risk.

A presidential spokesman, in a cautious response, said Seoul needed to understand “the exact meaning and intention” of Trump’s remarks.
But various ways to encourage dialogue on denuclearisation should be seriously considered, the spokesman said.

US Forces Korea said it had received no new instructions about its scheduled training exercises, including this summer’s Ulchi Freedom Guardian.
The other major joint exercise is known as Key Resolve/Foal Eagle exercise, usually conducted in the spring.

“In coordination with our ROK (South Korean) partners, we will continue with our current military posture until we receive updated guidance from the Department of Defense and/or Indo-Pacific Command,” it added.

Any suspension of the joint exercises would be a “substantial concession” to the North’s security concerns, said Alison Evans, deputy head of Asia Pacific Country Risk at IHS Markit.
There is a precedent for cancelling joint exercises to encourage talks. A major drill known as Team Spirit was cancelled several times in the 1990s as Washington held its first major negotiations over the North’s nuclear programmes.