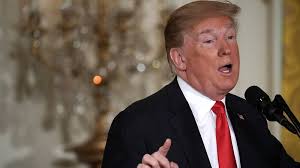 Trump says US will not be a migrant camp President Donald Trump has said he will not allow the US to become a “migrant camp”, as he stood by his administration’s immigration crackdown.

“The United States will not be a migrant camp,” he said at the White House. “And it will not be a refugee-holding facility – it won’t be.”

Photos over the weekend showed undocumented children being held in fenced enclosures at a Texas facility.

The UN human rights chief has condemned the policy as “unconscionable”.

“We cannot allow that to happen to the United States. Not on my watch.”

Earlier, he said European countries had made a big mistake by allowing in millions of migrants.

Mr Trump criticised Chancellor Angela Merkel of Germany in particular, saying her people were turning against their leaders because of the issue.

Mrs Merkel is in a migration dispute with her interior minister, Horst Seehofer, who wants to refuse migrants if they have already registered for asylum elsewhere in the EU.

The Republican president blamed Democrats for not coming to the table to negotiate immigration legislation.