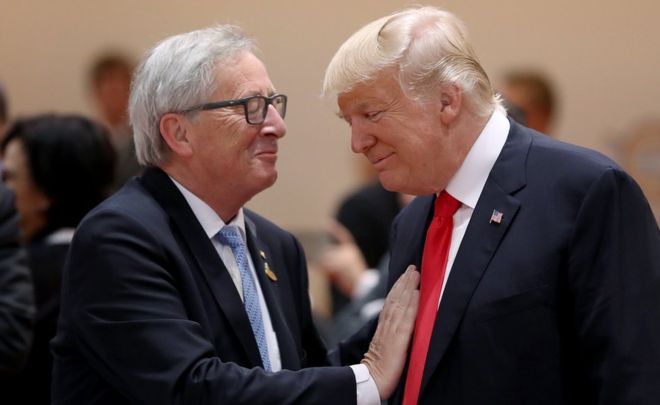 An ominous message for the head of the EU’s executive, Jean-Claude Juncker, as he heads to Washington. Both sides have already slapped tariffs on billions of dollars of imports, but a lot more is at stake. At first glance the two men look like chalk and cheese but there are plenty of similarities.

Both see themselves as consummate deal-makers with the personal touch. Neither is known for sticking to the scripts prepared by their advisers. Each has said that relations with Russia should be less confrontational.

At the G7 summit in Canada, Donald Trump described European Commission President Jean-Claude Juncker as “a brutal killer”. Mr Juncker replied that it was unusual for someone from Luxembourg to be treated as a threat.

So the banter is flowing already. The EU and the US are embroiled in a trade war, although Brussels would never describe it that way. The US government has applied tariffs of 25% on imports of steel from the EU and 10% on aluminium, alleging that US national security is threatened.

The EU retaliated with levies on American exports worth more than $3bn, including iconic items like bourbon, jeans and motorbikes.

Now US authorities are considering hitting back with measures to limit imports of European-made cars.

Inevitably President Trump explained it in a tweet: “If these Tariffs and Barriers are not soon broken down and removed, we will be placing a 20% Tariff on all of their cars coming into the U.S. Build them here!”

The EU thinks that the rationale for the American measures on aluminium and steel – that it’s all about national security – is ridiculous. A challenge has been lodged at the World Trade Organization.

The European Commission has already sent the US authorities an 11-page document which argues that targeting European car companies would be counterproductive because 120,000 American jobs are directly reliant on them. And Brussels fears for the future of the rules-based order under President Trump, but you get the impression they quite enjoy playing the role of saviour of the system.

The European Commission has said the trip is part of a “dialogue” designed to “de-dramatise” the situation. This is EU code for “Don’t expect too much.”

At the start of hostilities, the EU dangled the prospect of a free trade deal that would slash tariffs on goods flowing between the US and Europe. That offer has been withdrawn because the EU does not like the idea of negotiating under threat

'Millionaires are poor': Venezuelans struggle to survive as inflation spirals

Barbudans Want Discussions On Their Own National Flag