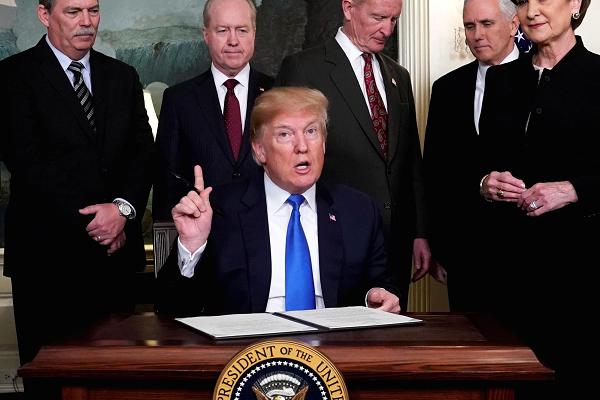 Trump slaps China with tariffs on up to $60 billion in imports: ‘This is the first of many’ 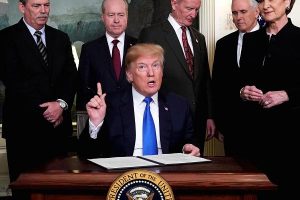 President Donald Trump signed an executive memorandum on Thursday that would impose retaliatory tariffs on up to $60 billion in Chinese imports.

“This is the first of many” trade actions, Trump said as he signed the memo.

The new measures are designed to penalize China for trade practices that the Trump administration says involve stealing American companies’ intellectual property. They will primarily target certain products in the technology sector where China holds an advantage over the U.S.

Lighthizer’s office will publish a list of targeted products in 15 days, and there will be a 30-day period for public comment, according to senior administration officials.

The bottom line, said Trump’s trade director, Peter Navarro, on Thursday, is that the U.S. is “strategically defending itself against economic aggression.” The president is standing up for American corporations, he added.

Lighthizer told lawmakers on Thursday, however, that China is likely to retaliate against the tariffs by targeting U.S. agricultural products that are reliant on the Chinese export market.

The Trump administration had previously signaled that the tariffs would apply to at least $30 billion in Chinese imports, multiple news outlets reported. Trump himself has pushed for $60 billion in tariffs on Chinese goods.

In the Senate Finance Committee on Thursday before Trump’s announcement, Lighthizer outlined the Chinese products that will be subject to the new tariffs, including aeronautics, modern rail, new-energy vehicles and high-tech products.

Trump will consider further actions against China in two weeks, based on the effect of the first phase of the tariffs, CNBC reported Wednesday, citing sources. The president is reportedly concerned about the severity of the new measures’ impact on American universities.

The Trump administration has regularly highlighted China’s $375 billion surplus with the U.S. as evidence of an unfair trade relationship.

In an opening statement to the House Ways and Means Committee this week, Lighthizer said that long-term trade deficits “to some extent reflect market distortions” and they are “having a negative effect on U.S. workers and businesses.”

The chairman of that committee, Texas Republican Kevin Brady, told CNBC on Thursday that the president should be cautious in his approach to new tariffs on Chinese goods.

“The challenge for every president is how to do it in a way that doesn’t punish Americans for China’s misbehavior,” Brady said. “So, you’ve really got to narrow these and target these. It is a very discerning line to do that.”

China’s foreign ministry argued on Thursday that it should not be punished if it doesn’t want to buy what the U.S. is selling.

Lighthizer also suggested that the U.S. may take action against the World Trade Organization for its alleged failures on promoting a fairer trade landscape. The Wall Street Journal reported Tuesday that the Trump administration is weighing the possibility of a lawsuit against the WTO policies that cover Chinese trade.

A senior administration official told reporters earlier on Thursday that the tariffs would be pegged to about $50 billion in Chinese imports.

The new trade restrictions exacerbate fears of sparking a global trade war that were raised after Trump signed executive orders enacting broad tariffs on steel and aluminum on March 8.

Russian agent may have limited mental capacity after nerve attack