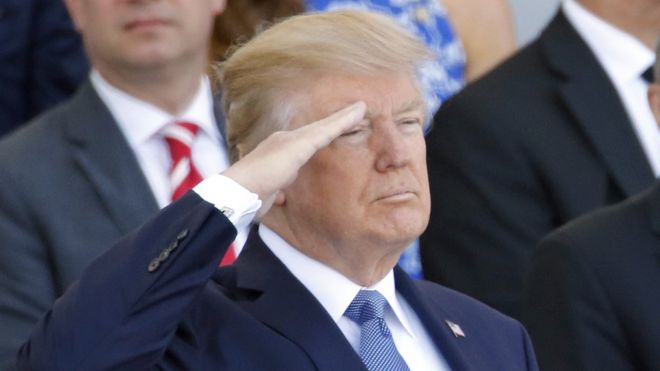 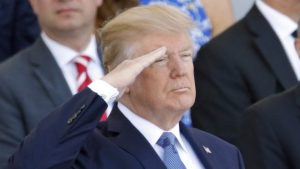 US President Donald Trump has asked the Pentagon to organise a large military parade in the nation’s capital.

The president made the request of top military chiefs in late January, after reportedly being impressed by a French Bastille Day parade last year.

“It was one of the greatest parades I’ve ever seen,” he later said. “We’re going to have to try and top it.”

Democrats compared the plan to displays of military might organised by autocratic nations.

The plan was first revealed by the Washington Post, before being confirmed by the White House press secretary, Sarah Sanders.

“President Trump is incredibly supportive of America’s great service members who risk their lives every day to keep our country safe,” she said.

“He has asked the Department of Defense to explore a celebration at which all Americans can show their appreciation.”

Military displays in Washington DC are usually only used to mark victory at the end of a war.

The Pentagon is now looking at the details of the event, though one White House official told the Washington Post plans were still at a “brainstorming” stage.

US media linked the plan to Mr Trump’s admiration for a military parade he attended in Paris in July last year.

The occasion, marking 100 years since America entered World War One, saw troops march down the Champs-Élysées, accompanied by dozens of military vehicles, flyovers of military aircraft, and traditional mounted cavalry.

Commentators say a US parade would be extremely expensive, given the cost of bringing military hardware and personnel to the capital and protecting its streets from tanks designed for war zones.

Democratic politicians have criticised the expense and said such ideas carry worrying symbolism.

Representative Jackie Speier, a member of the House Armed Services Committee, told CNN: “I was stunned by it, to be quite honest… we have a Napoleon in the making here.”

Speaking to CNN, Lt Gen Mark Hertling said: “I don’t know a whole lot of soldiers who like them [parades].”

“The military will do whatever the commander in chief asks them to do – but it’s not a good idea for our military.”

How unusual is this?

Large-scale military parades are seen by many as a relic of a bygone era and the Cold War, but they remain a common occurrence in many states – Communist and former Soviet nations and beyond.

But they are regular in other countries – Venezuela, Iran and Brazil all enjoy putting on a spectacle.

In France, the annual Bastille Day parade, which was beefed up after the November 2015 terror attacks, harks back to France’s militaristic past. An extravagant show in Saudi Arabia last year also reflected security concerns ahead of the annual Hajj pilgrimage to Mecca.

Like North Korea, Thai forces parade on armed forces day and countries such as Australia and Sri Lanka use military parades as part of national day celebrations.

Military parades can serve a patriotic purpose in monarchies – the UK celebrates the Queen’s birthday each year with Trooping the Colour.

The US, however, has largely reserved such ceremonies for the end of major conflicts.

The last such in Washington DC was on 9 June 1991, when President George Bush Snr celebrated the end of the Gulf War. It is thought to have cost taxpayers some $10m (£7.2m) and was followed by another parade the next day in New York.