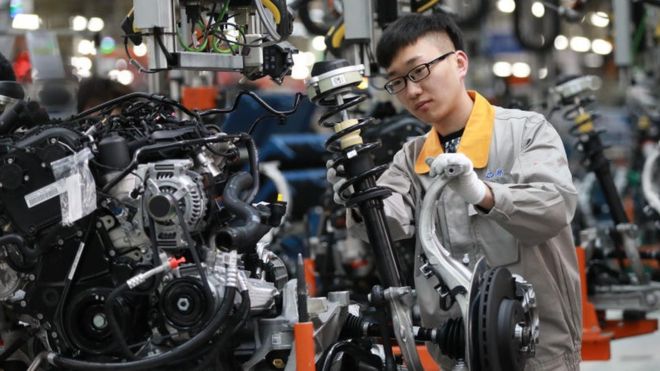 US President Donald Trump has instructed officials to consider a further $100bn (£71.3bn) of tariffs against China, in an escalation of a tense trade stand-off.

These would be in addition to the $50bn worth of US tariffs already proposed on hundreds of Chinese imports.

China’s Ministry of Commerce responded, saying China would “not hesitate to pay any price” to defend its interests.

The latest US proposal came after China threatened tariffs on 106 key US products.

In response to Mr Trump’s latest announcement, Foreign Minister Wang Yi said: “China and the US as two world powers should treat each other on a basis of equality and with respect.

“By waving a big stick of trade sanctions against China, the US has picked a wrong target.”

Ministry of Commerce Spokesman Gao Feng said: “We do not want to fight, but we are not afraid to fight a trade war.”

He said that if the US side ignores opposition from China and the international community and insists on “unilateralist and protectionist acts,” then China will “not hesitate to pay any price, and will definitely strike back resolutely… [to] defend the interests of the country and its people.”

Analysts have warned of the risk of a full-blown trade war for the global economy and the markets, and believe ongoing behind-the-scenes negotiations between the two giants are crucial.

How has this unfolded?

Earlier this year, the US announced it would impose import taxes of 25% on steel and 10% on aluminium. The tariffs were to be wide-ranging and would include China.

China responded last month with retaliatory tariffs worth $3bn of its own against the US on a range of goods, including pork and wine. Beijing said the move was intended to safeguard its interests and balance losses caused by the new tariffs.

Then the US announced it was imposing some $50bn worth of tariffs on Chinese-made goods, blaming what it described as unfair Chinese intellectual property practices, such as those that pressured US companies to share technology with Chinese firms.

Mr Trump argues that because Beijing forces any US firms setting up shop in China to tie up with a Chinese company, US ideas are left open to theft and abuse.

Mr Trump reiterated in his statement on Thursday that China’s “illicit trade practices” had been ignored by Washington for years and had destroyed “thousands of American factories and millions of American jobs”.

The draft details of the $50bn to $60bn worth of tariffs were released last week when Washington set out about 1,300 Chinese products it intended to hit with tariffs set at 25%.

China responded this week by proposing retaliatory tariffs, also worth some $50bn, on 106 key US products, including soybeans, aircraft parts and orange juice. This set of tariffs was narrowly aimed at politically important sectors in the US, such as agriculture.

In Mr Trump’s Thursday statement he branded that retaliation by Beijing as “unfair”.

“Rather than remedy its misconduct, China has chosen to harm our farmers and manufacturers,” he said.

“In light of China’s unfair retaliation, I have instructed the USTR (United States Trade Representative) to consider whether $100bn of additional tariffs would be appropriate… and, if so, to identify the products upon which to impose such tariffs.”

What could the impact be?

On the political front, Mr Trump’s latest announcement has elicited a less-than-friendly reception from some fellow Republicans.

They have warned that the tariffs will hurt Americans and cost jobs. They have also said relationships the US has with its other big trading partners could be hurt.

US retail giants including Walmart and Target have also asked Mr Trump to consider carefully the impact the tariffs would have on consumer prices and American families.

On Thursday, Ben Sasse, a Republican Senator from the farming area of Nebraska, said Mr Trump’s latest plan was “nuts” and that he hoped the president was “just blowing off steam”.

“Let’s absolutely take on Chinese bad behaviour, but with a plan that punishes them instead of us,” he said.

“This is the dumbest possible way to do this.”

Mr Sasse’s comments echo sentiment pouring out of various Republican-voting farming belts in the US. America’s soybean farmers are expected to be particularly hurt by Mr Trump’s tariff tactics.

To get a sense of how things might play out for those farmers, the trade tit-for-tat could hit soybean producers in the US – and possibly around the world.

China, which is a big producer of soybeans itself, buys about 60% of all soybeans exported by the US.

It uses the product to feed farmed animals, including pigs and chickens, as well as fish. Those animals are in turn used to help feed China’s enormous population.

China’s demand for soybeans and soybean products has buoyed the price of US soybeans for some time.

But Beijing’s tariffs against US soybeans will mostly likely see sales to China fall off, which will in turn hurt American farmers.

Meanwhile, China will need to set about sourcing the extra soybeans it needs from other countries.

India is one of the world’s biggest soybean producers, and analysts there have already pointed to a potential trade war between the US and China as an opportunity for its economy.

Other big soybean producers are Argentina and Brazil, and some studies suggest that is where China will turn to should the current set of proposed tariffs come into force.

But it could end up paying more than it currently does, ultimately forcing up the price of those animals which eat soybean products. So that would mean pork, for example, China’s most popular meat, could get more expensive. And food price inflation is something that will worry Beijing.

Naomi Broady misses out on quarter-final

UPP Calls for an independent investigator for the Wendel Robinson Probe