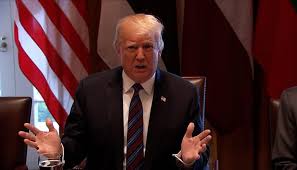 President Donald Trump has vowed to send the US military to secure the nation’s southern border with Mexico.

“We are going to be doing things militarily,” Mr Trump said at the White House on Tuesday, adding that it would be a “big step”.

Earlier Mr Trump threatened to cut aid to Honduras amid reports of a “caravan” of asylum seekers heading for the US.

Both of Mr Trump’s predecessors in the White House deployed National Guard troops to help secure the US border.

During a working lunch with leaders of Baltic countries on Tuesday, Mr Trump said the North American Free Trade Agreement (Nafta) was at risk unless Mexico stopped the flow of migrants.

Earlier in the day, he tweeted for the third day about the “caravan” of migrants heading north from Central America.

“The big Caravan of People from Honduras, now coming across Mexico and heading to our ‘Weak Laws’ Border, had better be stopped before it gets there,” he tweeted.

“Cash cow Nafta is in play, as is foreign aid to Honduras and the countries that allow this to happen.”

The horde, which has been marching along roadsides and train tracks in the southern Mexican state of Oaxaca, is being organised by the organisation Pueblo Sin Fronteras, or People Without Borders.

This is not the first time that Mr Trump has criticised the Central American nation, which has been plagued by increasingly deadly unrest since a disputed presidential election last November.

During a meeting at the White House in the Oval Office in January, he reportedly referred to that nation as a “shithole”.

Shaw calls on J'cans to invest more in idle lands