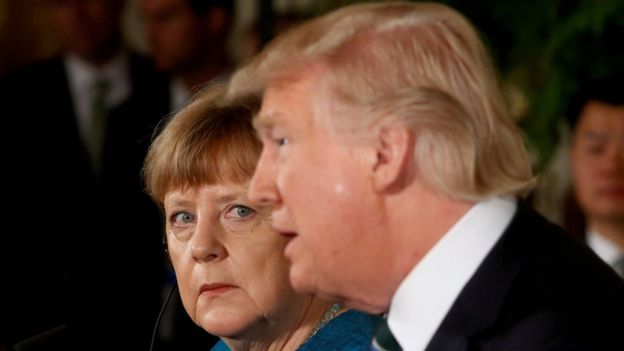 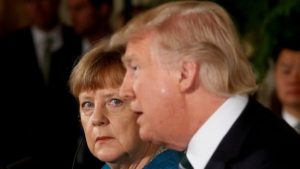 US President Donald Trump has attacked the German government’s approach to immigration, as he comes under pressure over his own crackdown on migrants.

Mrs Merkel is in the middle of a serious domestic row after defending her government’s immigration policy.

Meanwhile, Mr Trump has adopted a highly criticised “zero-tolerance” approach, which has split families crossing the Mexican border.That position has been condemned by many, including former First Lady Laura Bush – wife of Republican ex-president George Bush – who wrote about it in the Washington Post newspaper.

“[Trump’s] zero-tolerance policy is cruel. It is immoral. And it breaks my heart,” she wrote, citing stories of children held in detention centres.

In a series of tweets, the president defended his stance. “We don’t want what is happening with immigration in Europe to happen with us!” he said.

Meanwhile, Mrs Merkel is in a migration dispute with her interior minister, Horst Seehofer.

On Monday, Mr Seehofer gave her two-week ultimatum to come up with a EU-wide deal on migration, or he will start turning away migrants at the border – a move that could destroy the fragile coalition.

Mr Seehofer wants to refuse migrants if they have already registered elsewhere in the EU, but Mrs Merkel has refused to back his plan.

The disagreement has opened up a rift between Mrs Merkel’s Christian Democrats and Mr Seehofer’s Bavarian CSU party – two parties that have been closely aligned since the end of the World War Two.

Other claims in Mr Trump’s tweets have already been debunked by various German news sites, especially his assertion that “crime in Germany is way up”.

They pointed out that Germany’s crime rate is at its lowest since 1992, according to official figures released last month.