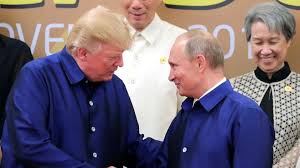 Trump ‘warned’ not to congratulate Putin in Russia election 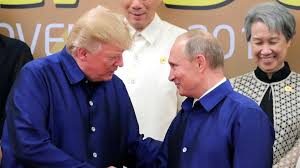 US President Donald Trump did not adhere to warnings from his advisers when he congratulated Vladimir Putin on his re-election, US media report.

A note to the president for his phone call with his Russian counterpart reportedly read: “DO NOT CONGRATULATE”.

Mr Putin’s controversial win came as his opponent was barred from the ballot, and some world leaders have been hesitant to congratulate him.

Mr Trump described the conversation with the Kremlin as a “very good call”.

He defended his call on Twitter on Wednesday afternoon.

The White House said in a statement that it’s a “fireable offence and likely illegal” to have leaked the president’s briefing papers, according to US media.

“An American president does not lead the free world by congratulating dictators on winning sham elections. And by doing so with Vladimir Putin, President Trump insulted every Russian citizen who was denied the right to vote in a free and fair election to determine their country’s future, including the countless Russian patriots who have risked so much to protest and resist Putin’s regime,” Mr McCain said in a statement.

Donald Trump reportedly went off script. Again. Or perhaps he never read the notes that he should avoid a congratulating a foreign leader accused of overseeing a multi-pronged effort to influence US politics and assassinate a former spy on the soil of a close US ally.

Why? During the campaign, Mr Trump praised Vladimir Putin and compared him favourably to Barack Obama. Even now, as evidence mounts of nefarious Russian activities, Mr Trump’s attitude seems unchanged. At the White House yesterday, he was more interested in discussing plans for meeting Mr Putin face-to-face.

Again, it seems, Mr Trump is at odds with his own administration. Where the US has been forceful in condemning the Salisbury attack and has imposed sanctions against Russians tied to 2016 election meddling and hacking, the president – in public statements and tweets – has taken a softer tone.

These latest developments will do nothing to quiet talk a rift between Mr Trump and his national security adviser, HR McMaster. Not only is Mr Trump reportedly disregarding his national security staff’s advice, the news leaked just hours after the Putin call. The president is already seemingly suspicious of his foreign policy team’s loyalty. This will make matters worse.

The US recently imposed sanctions on a group of Russians over alleged interference in the US presidential election in 2016.

The Kremlin said the conversation between the US and Russian presidents was “constructive and business-like”, adding that Russia hoped to “overcome problems” that had arisen between the two nations.

Mr Putin was re-elected by a landslide, with more than 76% of the vote, for a fourth six-year term.

German Chancellor Angela Merkel was among the first Western leaders to “warmly congratulate” Mr Putin on Monday – a day after his re-election – stressing the need to continue dialogue “to address important bilateral and international challenges and find viable solutions”.

The US president said the pair would meet in the “not too distant future” to discuss limiting a growing arms race, Ukraine and Syria.

During the call, Mr Trump did not mention the issue that has sparked growing Western tensions with Moscow – the poisoning of ex-spy Sergei Skripal and his daughter Yulia in Britain.

But Mr Trump on Wednesday agreed with Mr Macron on the need to “hold Russia accountable” for the spy attack, according to the White House.

The UK government blamed the nerve agent attack on Russia, which denies any involvement.

On Tuesday, 23 Russian diplomats expelled by the UK left London.

Moscow has also ordered 23 British diplomats to leave in a tit-for-tat response.

Fresh Food Galore: How to Grow a Family-Friendly Garden in Your Own Backyard