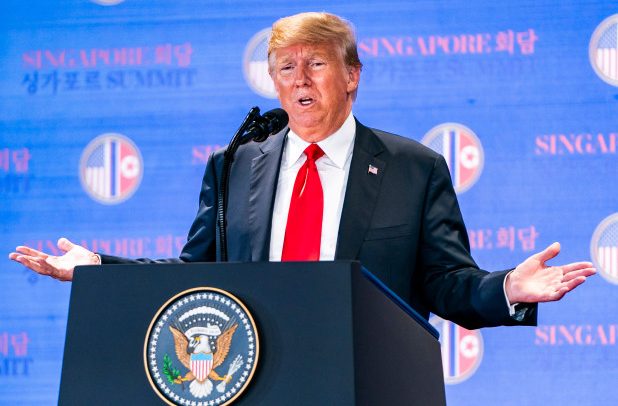 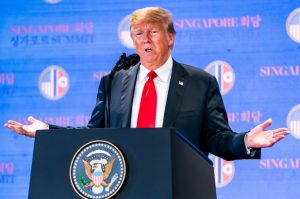 President Donald Trump rocked the region with the stunning announcement Tuesday that he was halting annual US-South Korean military drills — and wants to remove the 28,500 US troops stationed in the South as a deterrent against North Korea.

Trump’s surprise, almost offhand comments, made during a news conference after his summit with North Korean leader Kim Jong Un, seemingly upended decades of US defense posture on the Korean Peninsula.

The remarks contradicted countless previous declarations by US political and military officials over the years that the drills are routine, defensive and absolutely critical.

Trump has now essentially adopted the standard North Korean line, calling the military exercises a “provocative” drain of money and announcing they would stop while he continues talks with Kim, whom he repeatedly praised as a solid negotiating partner.

His statement was quickly portrayed by critics as a major, unreciprocated concession to a country that only last year was threatening Seoul and Washington with nuclear war.

It also seemed to leave officials completely off guard in South Korea, where the presence of US troops has long been described as necessary to maintaining peace on the peninsula.

“At this current point, there is a need to discern the exact meaning and intent of President Trump’s comments,” Seoul’s Defense Ministry said, adding that there have been no discussions yet with Washington on modifying drills set for August.

US forces in South Korea said it has “received no updated guidance on the execution or cessation of training exercises” and will continue to coordinate with South Korean partners and maintain the current posture until it receives an updated guidance from the Department of Defense or the Indo-Pacific Command.

Trump’s comments will be questioned by many in South Korea and beyond, with some seeing in them an effort by North Korea to drive a wedge between Seoul and Washington.

North Korea regularly calls the military exercises provocative preparations for a northward invasion, and many of the scariest standoffs in recent years on the Korean Peninsula have happened when the drills were being staged. Outside analysts believe the North objects to the drills because it must spend precious resources on its own war games and troop movements. North Korea also insists that the US troop presence in the South, as well as its nuclear “umbrella” over allies Seoul and Tokyo, are part of America’s “hostile” policy toward the North.

“I want to bring our soldiers back home,” Trump said, although he added that it’s “not part of the equation right now.” Then he said: “We will be stopping the war games, which will save us a tremendous amount of money unless and until we see the future negotiation is not going along like it should. But we’ll be saving a tremendous amount of money. Plus, I think it’s very provocative.”

The comments could fundamentally change the way the United States — whose alliance with Seoul was forged after a 1950 surprise attack by the North started the Korean War — operates in South Korea.

Trump’s announcement that the US would stop military exercises, his description of those drills as “provocative” and his suggestion that he wants to pull US troops out at some point are “all things that Trump is putting on the table as concessions, all in exchange for some vague promises by the North Koreans,” said Paul Haenle, a former China director at the White House National Security Council in the Barack Obama and George W. Bush administrations.

Annual military drills between Washington and Seoul have been a major source of contention between the Koreas for years, and analysts have wondered whether their continuation would hurt the inter-Korean detente that, since an outreach by Kim in January, has replaced last year’s insults and threats of war. North Korea last month broke off a high-level meeting with Seoul over South Korea’s participation in a two-week military exercise with the United States.

North Korea’s state media, referring to the drills, recently demanded that Washington “stop the acts of threatening its dialogue partner by force.”

Since the 1970s, the United States and South Korea have held a major summertime exercise called Ulchi Freedom Guardian that involves tens of thousands of troops. There are also annual springtime drills. Drills called Team Spirit, one of the largest annual military maneuvers in the world at the time, were held from 1976 until 1993, when, after North Korea agreed to dismantle its existing nuclear facilities, the exercises were canceled and have not been held since.

Moon Seong Mook, a former South Korean military official, said Trump’s comments on the drills confirmed what many in South Korea had feared all along — that North Korea would attempt to drive a wedge between Washington and Seoul and gain substantial concessions from an unconventional US president who thinks much less of the traditional alliance than his predecessors.

“The core of the US-South Korea alliance is the US troops stationed in South Korea and the joint US-South Korea military drills, but the American military presence in South Korea wouldn’t mean much if the militaries don’t practice through joint drills,” said Moon, now a senior analyst for the Seoul-based Korea Research Institute for National Strategy. “I am concerned that the summit between Trump and Kim will prove to be a setback in the global efforts to denuclearize North Korea and also introduce instability in the alliance between Seoul and Washington.”

Tobacco industry gets deadline to comply with new labeling requirements