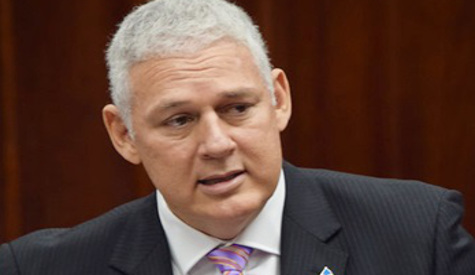 Truth, according to Trump and Tropical Trump The line of argument expressed by Rudy Giuliani, who represents US President Donald Trump, when expressing concerns over having President Trump sit down for an interview with special counsel Robert Mueller as part of the probe into Russian meddling in the 2016 US election, is revealing:

“And when you tell me he should testify because he’s going to tell the truth – that he shouldn’t worry – that’s so silly because it’s somebody’s version of the truth, not the truth.”
Then there’s Saint Lucia’s Prime Minister Allen Chastanet, aka Tropical Trump, in charge of an administration that perpetrates an attitude of ignorance toward the truth: “The truth is what you believe the truth to be.”

Either way, arguing fact or fiction, conditions are ripe for a robust encounter where ethics and moral values are changing society and money is now pre-eminent in transforming our democracy into an oligarchy.
Last Friday’s news item published on Caribbean News Now: “Saint Lucia union mobilises in protest over new border control unit” surely struck a chord.
One Facebook user commented:

“You can’t have two crooks running a country. I’ve said it many times on Facebook. But Lucians appear to be slow learners.
“Saint Lucians did not force Allen Chastanet to resign as PM when it became apparent that he and Guy Joseph are under a US investigative cloud regarding bribery and political corruption involving a US citizen.

“Well, to stay out of a US prison, Allen Chastanet is determined to stay in office. He needs dictatorial control. Thus people are told to resign from their current jobs and reapply to his new boards. Lucians force Allen Chastanet out of office before it is too late.

“It is evident Allen Chastanet is about three things: robbing Saint Lucia, maintaining power and staying out of a US prison. You didn’t force him to resign so he called you ‘jackasses’ and now he forces you to resign and then reapply for a maybe job.
“Bad news, folks. One Bajan down, two Lucians determined to stay out of Uncle Sam’s jail.”

Certainly, this response evidences that consistency, stability and truthfulness matters. And so, in the interest of respect and loyalty, were multiple conversations pertaining to my comment on social media resonated, as to the complaint against WPC 186, Lana Fontenelle,
I wrote:
“It is a breach of security to interfere and or access unsecured communication in a secure local: e.g. immigration area. And secondly, the minister is out of his line of duty and authority.
“It is a waste of time and actually stupendous of the authorities to proceed as they are currently. Any average lawyer can trash that in court!
“Also the “volunteer” had no business in a secure environment of national security like seaport or airport. Yet I hear talk of international standards!”

The national security minister has an obligation to protect the citizens of Saint Lucia against all enemies, foreign and domestic. Which makes me wonder, if not taken seriously, reports in the local press that:
“He [national security minister] was informed that there was a letter from the Office of the Prime Minister indicating that Martinique nationals would have been arriving, requesting the Immigration Department to make the necessary arrangements to fast-track their entry,” arguing that “This has been done all over the world. The cricketers come in 25 – 30 people, you think each cricketer is going to take his passport and bring it to the immigration officer?

The common view prescribed by the national security minister that: “Ministers of government carry a certain amount of weight and respect is due,” is wholly inconsistent and subject to conjecture to the meaning of ‘weight’ and ‘respect’ in conjunction with accountability and transparency.
Neither co-exists with the Chastanet-led administration.

However, the probability exists in this situation that the political views outweigh the decisions of national concern, taking into account the imposition of a visa requirement on Venezuelans, but waived for Chinese citizens.

Moreover, this is on the backdrop of a new border control unity – an merger of Immigration, Customs and Excise departments and perhaps Marine Police Unit (notwithstanding IMPACS and the Leahy Law) reportedly into a private entity, beyond the oversight and jurisdiction of the public service.

“I think there are genuine concerns of double jeopardy to threats not currently addressed, including the un-checked dismantling of government institutions for private corporation control. The timing is suspect in the context of securing Saint Lucia’s porous borders 24/7, in a political culture where the prime minister says, ‘The truth is what you believe the truth to be,’ with an affinity for ‘alternative facts’ and acts as if he is a colonial king. Collectively, the actions pursued [devoid of policy] are suspect and risky,” said one source in the intelligence community.

Who knows what the future will bring in a country experiencing challenging financial circumstances, mostly self-inflicted and governed by untruthful and rogue ministers of government, as never before in the history of Saint Lucia.

So, of course, the truth offends. And only a mad king will attempt to punish or silence critics – a terrible mistake, no doubt!
In any case there’s more to life beyond politics. And in times of crisis many put aside petty differences, working together for the good of the country. And for that matter, it’s a laudable aim to understand the strategy and the variables involved.

The choice is clear, in this sad spectacle of the Chastanet-led administration.
From where I sit, that’s what’s happening, to make plain, what’s realistic and true, the distinction between unpleasant fact and fiction, credibility vs cowboys and crooks and to eventually defeat the Ali Abbas wherever they assemble.
In my commentary, Liberty of the press, I illustrated that:
“Truth and transparency are safeguards to freedom. Therefore we must commit to stave off the new status quo, denounce censorship, falsehood and distortions, in exchange for an open, free and accessible society.”

But I’d also mention that it is perhaps quintessential the tactics of the Chastanet-led administration to take control of public enterprises, Hewanorra International Airport, a new border control unit, the acquisition of lands, a watered down education policy to vocational services and apprenticeship programs, an unmerited health care system and to ‘execute, execute, execute’ everything Saint Lucian.

In any case, the country is heading towards a new oligarchy, which reflects the measure and value of actions tantamount to treason.
Then again, the making of a quiet revolution stands to order, in a crisis that reinforces truthfulness matters. And the fact that respect and loyalty to country are divine in defence to the threat and security of Saint Lucia.

Survey finds many children not vaccinated in Haiti