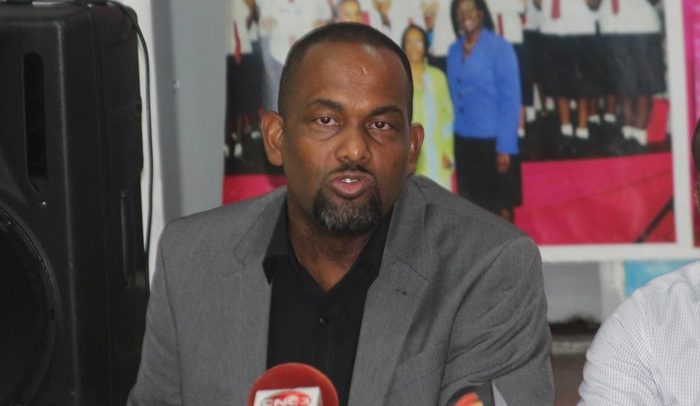 The Government will have to find spaces for almost 2,000 students enrolled in private secondary schools if it fails to resolve an ongoing dispute over a proposed increase in fees owed to schools before the opening of the new school year in September, T&T Association of Private Secondary Schools president Leslie Hislop said yesterday.

He made the comment at a press conference at Bishops Centenary College in Woodbrook yesterday, hours after the T&T Guardian reported that teachers at the school walked off the job on Monday due to non-payment of salaries.

The non-payment was caused by delays in the Ministry of Education’s dispensation of fees for students this term, which has affected the cash-strapped school’s ability to pay its monthly wages.

Hislop explained that since 2015 they had been in negotiations with the ministry on increasing the fee per student per term from $1,200 to $5,700.

“When 80 per cent of your school population is being paid for by the State and they are paying what they are paying, it is financially impossible to continue. So these students will have to be reassigned somewhere else because the reality is these schools are looking at closure,” Hislop said.

He estimated that there are 2,600 Government students enrolled in his members’ schools and claimed most of the schools were only able to operate under the fee structure in the past due to intervention from religious organisations affiliated with them.

“The simple reason for that is that over the years the religious organisations that manage and run these schools have been subsidising the costs of education to the nation’s children to the tune of approximately $1.5 million per year,” Hislop said.

He explained that last December the association submitted a proposal for the increased fees but the ministry only met with them last month after they made repeated claims over the ministry’s failure to make payments for the entire school term.

“I told the officials that they need to stop frustrating the private schools and just pay what is owed,” Hislop said.

Asked whether the dispute would affect placements of this year’s Secondary Entrance Assessment (SEA) students, who will receive their results today, Hislop said he was told none would be made.

“We are willing to accept the Government students. However, it is financially impossible for the schools to continue to educate students at a cost of $1200 per term,” he said.

Hislop also claimed that schools are also unable to raise their fees for private students because of the rate paid by Government.

“There are parents who are saying why do I have to pay more than what Government is paying for the students? It puts schools in a position where it is even difficult to carry the figure to what it should be because parents are holding us to ransom,” he said, noting the average fee for private students is currently between $3,500 and $4,000 per term.

Anthony McCollin, a representative of the organisation, called on Prime Minister Dr Keith Rowley or Finance Minister Colm Imbert to intervene, as he said the dispute would also seriously affect children and their parents should they have to shut down operations come September when the new school year resumes.

“Parents are now uncertain if they would have to change uniforms, books or their whole transportation arrangement. We have not seen any action or political will and we are asking for the intervention of the Prime Minister and Minister of Finance,” McCollin said.

Bishops Centenary College’s board chair Grace Talma also gave an account of how the impasse had affected her institution.

“I am concerned because for two days now this school has not been able to provide any educational contribution to students. They had to leave because the teachers have left the school because they haven’t been paid for the whole term,” Talma said.

She explained that all but 60 of the 478 students enrolled at the school were placed there by Government.

Addressing the issue, during yesterday’s sitting of Parliament, Garcia reiterated that Government was not responsible for paying teachers’ salaries at the private schools. However, he admitted that there had been delays in paying fees for the current term three.

CCJ to get new president at CARICOM Conference opening

West Indies aim to put Bangladesh on the back foot early