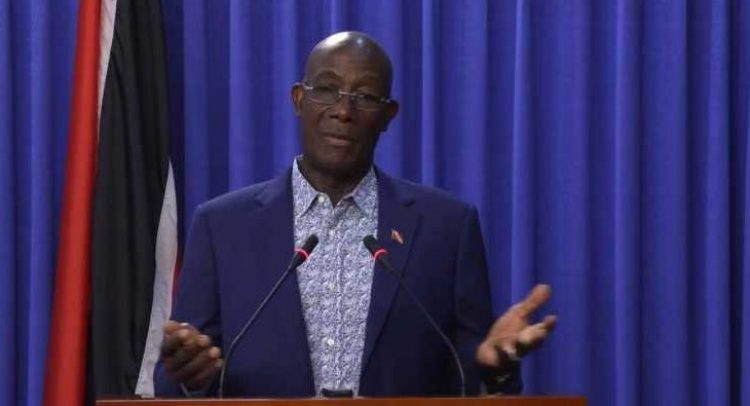 Prime Minister Dr Keith Rowley said he has asked the British and Barbados governments for help with investigations into the Drugs Sou Sou (DSS) raid in La Horquetta in which $22 million was seized by the police and later returned. He spoke publicly on the matter for the first time on Thursday night at a PNM post-Budget virtual meeting.

Dr Rowley said the roles of the T&T Police Service, the Defence Force and criminal gangs in that incident were matters of national security.

“I can tell you are head of the National Security Council, I have not had the simplest of answers in that matter. All I can say to you is that as head of the National Security Council I am disturbed and because I was disturbed . . . and because of what it means, pointing to and fingering unacceptable levels of corruption in the Trinidad and Tobago Police Service, immediately I approached the British Government, with whom we have a memorandum of understanding dated 2018 to cooperate on matters of national security. I approached the British Government for help and we are awaiting British police officers in Trinidad and Tobago on the matter of the Drugs Sou Sou,” he said.

”On the same matter, I approached the Prime Minister of Barbados.

“As I speak to you now, two senior Barbados police investigating officers are on their way to Trinidad and Tobago and they will form part of a team that will comprehensively examine this matter and find out where, how, whom and why $22 million could have been found by the police, enter a police station, disappear after and nobody could tell the country what happened there and members of the Defence Force could stand up on the front page of the newspapers and telling the country, “I am the one organising that.”

Dr Rowley, who maintained that the DSS is not a sou sou, warned that if the incident was not investigated properly, “it will be a cancer that will eat the soul of this nation.”

The Latest: US testing 3 drugs to tamp down coronavirus