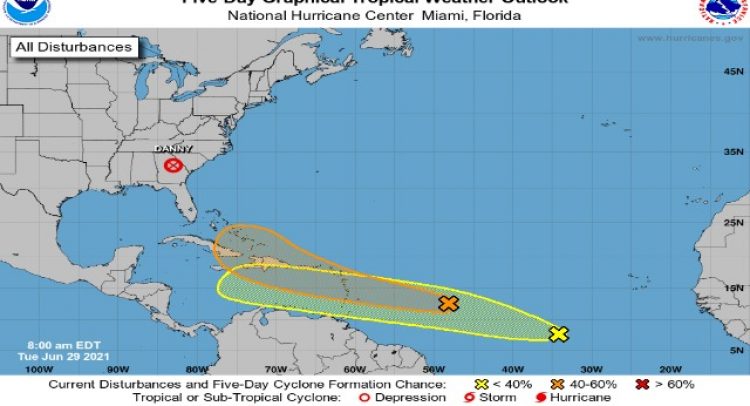 Basseterre, Tuesday, 29th June, 2021, (MyVue News.com)-It is still too early to determine what impact is possible, but residents of St. Kitts & Nevis should be keeping a close eye on two weather systems that are approaching the archipelago of the Caribbean islands.

The National Hurricane Center in Florida, in its forecast of Tuesday morning, 29th June, indicated that the first system could reach the Lesser Antilles in less than 48 hours.

“Disorganized showers and thunderstorms continue in association with a tropical wave located over the tropical Atlantic, about 850 miles east of the Lesser Antilles,” said the report.

The NHC also stated that “Some slow development of this disturbance is possible later this week and this weekend while the system moves westward to west-northwestward at 15 to 20 mph, likely reaching the Lesser Antilles by Wednesday night.”

The formation chances through the next 48 hours are low, at 30 percent.

The second system is not yet in the Caribbean area but is being monitored.

In the case of this one, the NHC said shower activity associated with a tropical wave located about 800 miles southwest of the Cabo Verde islands has become a little better organized since yesterday,(Monday)

“Additional slow development of this system is possible during the next several days as it moves generally west-northwestward at about 20 mph,” stated the Tuesday morning report.

Residents of St. Kitts & Nevis should, however, keep abreast with the latest weather reports for further information.

Resolution to extend the State of Emergency in St. Kitts and Nevis passed in Federal Parliament