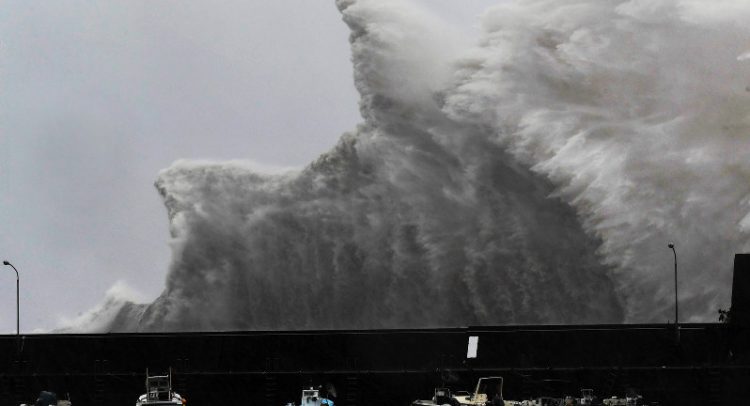 Japan is bracing for flooding and landslides after what could be the strongest typhoon to hit the country in a quarter of a century made landfall on Tuesday.

Local media reported that one person died and several others were injured after Typhoon Jebi caused violent winds in the west of the country.

Several people were injured at Kyoto station when part of a glass ceiling collapsed, according to police. A number of vehicles were blown on to their sides on a motorway, while a truck narrowly escaped being swept off a bridge connecting Shikoku Island and the main Japanese island of Honshu.

TV networks showed dramatic footage of a 2,591-tonne tanker that had collided with the side of a bridge linking the mainland with Kansai International airport, which stands on an artificial island in Osaka Bay. The tanker and bridge were damaged but the ship’s crew were unhurt. The airport’s runway and the basement floor of a terminal building were flooded, according to local authorities.

Evacuation advisories were issued for 1.19 million people, along with a stronger but non-mandatory evacuation order for a further 16,000 people, as the wind and rain began to intensify on Tuesday afternoon. Most of those advised to leave their homes and head to 1,500 temporary shelters were in the western port city of Kobe.

The meteorological agency said in a televised warning that the system could trigger violent winds, landslides and flooding in southern and south-western parts of the archipelago, as well as high tides, lightning and tornadoes.

The prime minister, Shinzō Abe, urged residents to “evacuate early” and cancelled a planned trip to Kyushu in Japan’s south-west to oversee the government’s response.

Television footage showed waves pounding the coastline amid warnings of high tides later in the day.

While the typhoon is not expected to make a direct hit on Tokyo, its path will take it over the cities of Osaka and Kyoto before it heads out to sea, according to the meteorological agency.The agency added that if Jebi maintained its current strength of 216kmh (135mph) it will be the first “very strong typhoon” to strike Japan since 1993, when a powerful typhoon left 48 people dead or missing. “It is possible that [Jebi] will make landfall while maintaining its extreme strength,” said Ryuta Kurora, the agency’s chief forecaster.

In the hours before the storm made landfall, some areas were already experiencing “violent storms, and the storms will get stronger and stronger”, he added.

The typhoon comes soon after parts of Japan were hit by torrential rains in July that killed more than 200 people.

One resident of Osaka said her house was shaking and the lights were flickering on and off. People in nearby Kobe said on social media that the wind was shaking their apartment buildings and ripping branches off trees.

As it made its way north from the southern island of Okinawa, Jebi was already causing widespread disruption to flights and public transport. More than 700 domestic and international flights were cancelled, along with scores of ferry and train services, the public broadcaster NHK said.

Bullet train services were reduced, while local schools closed for the day.

The meteorological agency said Jebi was expected to pass over the Sea of Japan by late Tuesday and to have weakened to an extra-tropical cyclone by Wednesday morning.