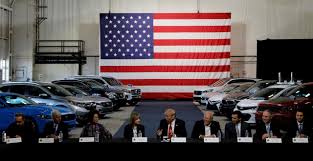 A Trump administration investigation of car and truck imports raised the threat on Thursday of renewed conflict over trade policy for an industry that thrives on stability and sent stocks in Asian and European automakers down.

U.S. Commerce Secretary Wilbur Ross said on Thursday the investigation was still in its early stages but that other countries’ high, artificial barriers such as tariffs and other interventions have skewed the marketplace.

“Now it’s very difficult to get back to a reciprocal arrangement,” Ross said in an interview on CNBC, a day after announcing the investigation, which could lead to new U.S. tariffs on imported vehicles.

The probe, launched under Section 232 of the Trade Expansion Act of 1962, will look at whether vehicle and parts imports are threatening the industry’s health and ability to research and develop advanced technologies, Ross said on Wednesday.