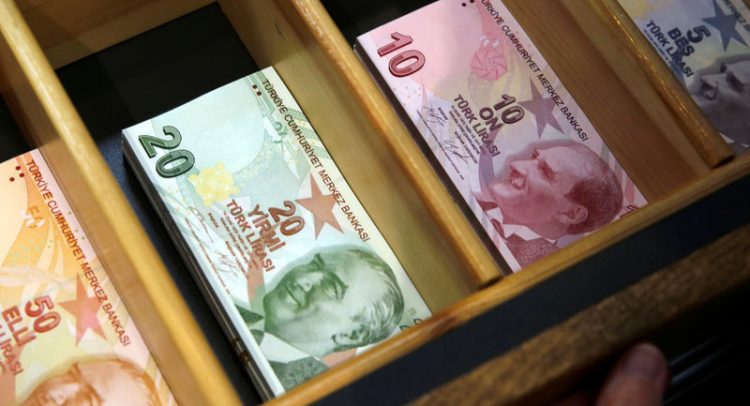 U.S. bank shares fell for a third straight session on Monday as investor appetite for risk weakened on worries that a currency crisis in Turkey would spread to other countries.The Turkish lira has tumbled on concerns about President Tayyip Erdogan’s increasing control over the economy and deteriorating U.S. relations, falling as much as 12 percent at one stage on Monday.

The S&P 500 Financial sector index was the biggest drag on the benchmark index .SPX with big banks among the leading losers. The S&P bank index .SPXBK fell 0.9 percent on Monday and was on track for an almost 3 percent drop over three sessions.

The U.S. banks with the biggest disclosed Turkey exposure in the second or first quarters were Goldman Sachs (GS.N), down 1 percent, Bank of New York Mellon (BK.N), down 1.4 percent and Bank of America (BAC.N), down 1.9 percent.

“I don’t think Turkey in and of itself is a big concern for U.S. banks. Exposure tends to be low. The concern becomes if there’s contagion and it spreads to other emerging markets and other parts of the world,” said Jeffery Harte, an analyst covering banks at Sandler O’Neill.

“Does it derail some of the strength we’ve seen in capital markets, in mergers and acquisitions, in equity underwriting especially outside of the U.S?” he asked. “I don’t think that’ll be the case but that’s what I’m watching.”

In research Keefe, Bruyette & Woods listed Goldman as the most exposed to Turkey with total credit exposure of $2.53 billion or 3.5 pct of tangible common equity (TCE) in June, mostly with non-sovereign counterparties and borrowers.

Goldman Sachs shares have fallen in the last four sessions, with a 1.8 percent drop on Friday.

Bank of New York Mellon (BK.N), a provider of treasury, issuer and foreign exchange services to Turkey’s top 10 financial institutions, had $634 million exposure on June 30, down from $707 million on Dec. 31. That represents about 3.3 percent of that bank’s tangible common equity, KBW said.

While Bank of America no longer listed Turkey among the top 20 countries where it has exposure outside of the United States, it was the first to disclose exposure in the first quarter according to KBW.

In the first quarter Turkey was No. 20 on the bank’s non-U.S. exposure list, with $3.15 billion in exposure or 1.8 pct of tangible common equity, KBW said. Bank of America shares fell 1.3 percent on Friday and extended losses Monday.

“You’ll see the anxiety from the last financial crisis loom over stocks. All you need is a spark to get people’s attention … Once it settles down you can reinvest,” said Vining Sparks analyst Marty Mosby.

“There’s a lot of stop gaps in between a country experiencing stress and a complete financial crisis.”